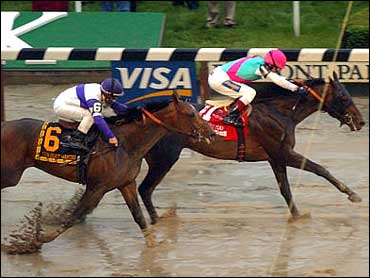 New York is no longer a one-horse town.

Overcoming the mud, the rain and the home-track advantage of favored Funny Cide, Empire Maker captured the 135th Belmont Stakes on Saturday to shatter the Triple Crown hopes of the New York-bred gelding and disappoint a legion of his sopping-wet fans.

Funny Cide, winner of the Kentucky Derby and the Preakness, finished third on a sloppy track to his nemesis in their third head-to-head meeting of the year. The even-money favorite led early, but could not hold off a charge by fellow 3-year-old Empire Maker with 3/8 of a mile to go.

"He showed what he could do," said winning jockey Jerry Bailey, whose horse finished second in the Derby and skipped the Preakness with a sore foot. He had earlier defeated Funny Cide in the Wood Memorial, a pre-Derby race.

"I'm just excited for the horse," Frankel said after the 1&1/2-mile race, the longest of the Triple Crown events. "It's a little redemption."

Funny Cide was cheered wildly by the crowd after the race, a tribute to his near-history making bid. Empire Maker defeated second-place finisher Ten Most Wanted by 3/4 of a length.

"It's just disappointing," said Barclay Tagg, trainer for Funny Cide. "I feel sorry for the people who were behind him."

It was the fifth time in the last seven years that the winner of the Derby and Preakness failed to win at Belmont Park. The last Triple Crown winner was Affirmed in 1978, winner by a head over challenger Alydar.

Only 11 horses have won the Triple Crown. Sir Barton became the first in 1919.

The loss also denied his owners a $5 million Triple Crown bonus payment, along with the $600,000 Belmont purse.

Hours before the race began, a steady downpour soaked both the track and fans. The course turned to slop, although most fans remained upbeat despite the deluge. New York racing officials estimated the weather kept up to 20,000 fans at home; they had anticipated a record crowd of more than 120,000.

"We came to see Funny Cide run," said Bob Walton of Saratoga Springs, sipping a beer beneath an umbrella. "You've got to make do with what they give you. We'll make the best of it."

Funny Cide put in a sizzling final workout on Tuesday, leading to speculation -- perhaps founded by the race's result -- that he might have left his best race on the track. Tagg denied that workout had anything to do with Saturday's disappointing finish.

Following that workout, Funny Cide spent much of his time hanging out in his home -- Barn No. 6 at Belmont, a racetrack where he had won all three of his previous races.

Since capturing the Kentucky Derby on May 3, Funny Cide evolved into a people's horse: a favorite with both bettors and casual fans. He was a horse with personality, posing for photographers, or taking candy from a Belmont security guard.

His owners were as unlikely to reach the winner's circle as their horse.

In a world dominated by wealthy businessmen and Saudi sheiks, Funny Cide was purchased in November 2001 by a half-dozen friends from Sackets Harbor High School making their first foray into the racing game.