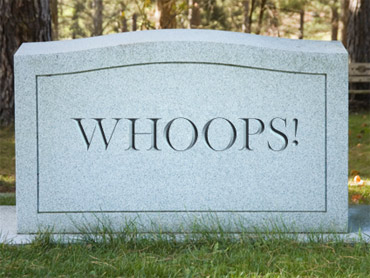 A New Mexico family is suing two funeral homes over a gruesome incident in which members unwittingly accepted a bag containing a relative's brain and only became aware of it by the odor a day later.

Funeral homes in New Mexico and Utah, where the woman died, are blaming each other for the mistake. Both have been named in the lawsuit.

"This is just a sad tragedy," plaintiffs attorney Richard Valle said Wednesday. "This almost feels like something you'd read about in a Stephen King book."

The suit was filed Monday in state District Court in Albuquerque. According to the complaint, the woman's relatives "smelled a foul odor coming from the bag" they received from New Mexico's DeVargas Funeral Home and Crematory of the Espanola Valley.

The woman, identified by her initials M.F.R., died in a car accident in Utah on Sept. 28.

"We inherited the problem from Utah," DeVargas said. "We are a very reputable company and we were dealt a bad hand."

In addition to the New Mexico funeral home, the lawsuit also names as defendants Serenicare Funeral Home in Draper, Utah, and Inman Shipping Worldwide, an Ohio-based shipping company that transported the body to northern New Mexico.

A woman who answered the telephone after business hours Wednesday at Inman's call center said nobody from the company was available to comment.

Serenicare owner Dick Johnson said his firm's action was typical within the industry.

Characterizing the brain as "75 percent water," he said the woman's brain went into a bag because it had sustained substantial trauma from the crash.

"Rather than try to reinsert the brain into a damaged head, it is common practice to ship it inside a bag," he said.

He said said the bag containing the brain was placed in a casket with the rest of the remains for transport to New Mexico and eventual burial.

Johnson also said when someone has died in a violent crash, there's usually blood "and who knows what" on clothing or other items, so his employees typically sit down with relatives of the victim and encourage them to let the funeral home discard the bag rather than accept it.

He also denied that the Utah funeral home combined the brain and personal items in a single bag.

"I think once all the discovery takes place, it will become evident there was some negligence at that end," Johnson said. "We feel bad. We don't know what could have been done differently, but we follow standard industry practice."

One day after interment, relatives noticed the smell and opened the bag.

"Plaintiffs ... experienced shock, horror and great fear upon learning that decedent's entire body had not been buried," the lawsuit says.

The brain later was buried with the woman's body.