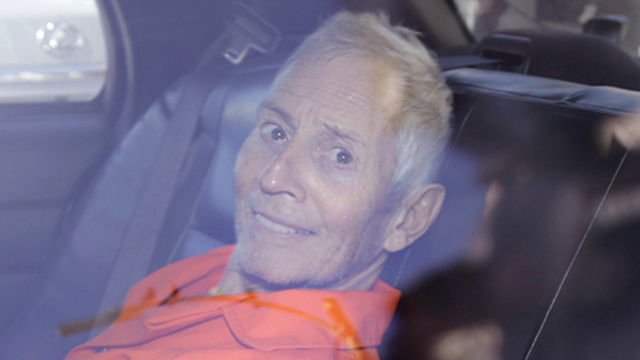 The Los Angeles County district attorney's office jointly filed an agreement with Durst and his lawyers for his return by Aug. 18. Durst had previously waived extradition.

Court filings have shown that Durst has struck a plea deal with federal prosecutors on a weapons charge in New Orleans.

Durst, an estranged member of the family that runs 1 World Trade Center in New York, faces a murder trial in Los Angeles in the death of his friend and onetime spokeswoman Susan Berman.

The 72-year-old millionaire is accused of killing Berman to keep her from talking to investigators looking into the disappearance of his first wife in 1982.

"The agreement has solely to do with Robert Durst's arraignment once he reaches California. It's part of our effort to have Robert Durst face and defeat the murder charge in California as soon as possible," attorney Dick DeGuerin said.

"I don't know. I think the evidence here is a lot more troubling for the prosecution," DeGuerin told CBS News' "48 Hours" in March. "Not only is it a circumstantial case, it's a weak circumstantial evidence case, and it's based primarily on two things -- this junk science letter and the bathroom confession."

DeGuerin was referring to an anonymous letter sent to L.A. police and a startling moment during the final episode of "The Jinx," a six-part HBO documentary about him, when Durst was heard saying: "There it is. You're caught. Killed them all, of course."

The weapons charge has kept Durst jailed in Louisiana since March. It stems from a gun that was found when Durst was detained at a hotel room in March on the eve of "The Jinx," in addition to the disappearance of his first wife, Berman's death, and the death and dismemberment of a neighbor in Galveston, Texas, in 2001.

U.S. District Judge Helen Berrigan in Louisiana postponed Durst's trial on the weapons charge earlier this month to give attorneys time to work out a date to sign a plea agreement. On Thursday, she scheduled a change of plea hearing for Feb. 3.