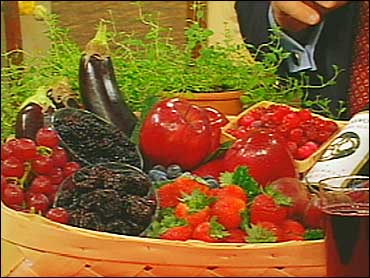 A multiyear study involving more than 100,000 participants provides added support that eating lots of fruit and vegetables is good for the heart.

But the analysis failed to show similar benefits for cancer, a result that prompted the Journal of the National Cancer Institute, which published the study Tuesday, to raise questions about its findings.

The report supports the American Heart Association's recommendations to consume at least five servings of fruit and vegetables per day, according to the researchers, led by Dr. Walter Willett of the Harvard School of Public Health.

But for cancer, the report said, "The protective effect of fruit and vegetable intake may have been overstated."

The research team studied 71,910 females in the Nurse's Health study and 37,725 males in the Health Professionals Follow-up Study. The research began in the mid-1980s and the report followed the participants until 1998.

They found participants who ate five or more servings of fruit and vegetables daily had a slightly decreased risk of heart disease, but there was no statistically significant difference in cancer rates.

The researchers provided several possible explanations for that result, while the journal published an editorial suggesting potential sources of error.

It may be that cancer risk is increased only in people who eat few fruits and vegetables, the researchers said. Since most of the study participants - nurses and other health professionals - tended to include fruit and vegetables in their diets, no protective association would have been noticeable.

Another possibility, the authors said, is that it takes longer for cancer to develop than heart disease, so it may take longer for a protective association from higher fruit and vegetable consumption to show up.

In addition, they said, the overall finding does not preclude protective effects of some specific vegetables.

Fruits were more strongly associated with reduced heart disease than vegetables, the researchers said. Among vegetables, those most closely related to better heart health were green leafy vegetables.

In an editorial in the same issue of the journal, Dr. Arthur Schatzkin and Victor Kipnis of the National Cancer Institute in Bethesda, Md., contend it "remains an open question" whether eating fruits and vegetables provides cancer protection.

Errors in collecting the data could obscure a cancer reduction associated with eating fruit and vegetables, Schatzkin said. Even a modest degree of protection could translate into many lives, "since everybody eats," he said.

"Our whole point was, look, we know we're dealing with a certain amount of error in measuring what people eat, and that error is enough to make a modest association disappear," Schatzkin said in a telephone interview.

The questionnaire method used to collect data on eating habits is subject to error, Schatzkin and Kipnis wrote. They also questioned statistical methods used, noting that the researchers adjusted for several other factors such as total energy intake, smoking, alcohol use and taking vitamins, which also may be subject to error.

"In other words, the evidence is simply inadequate at this time to determine whether fruit and vegetable intake confers modest protection against cancer," Schatzkin and Kipnis concluded.

The research was funded by the National Heart, Lung and Blood Institute, National Institutes of Health and the Florida Department of Citrus.