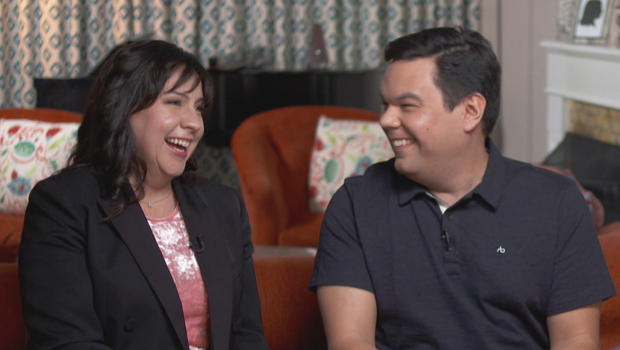 "Let It Go" was the hit song of "Frozen," the 2013 Disney animated film. Now it's being heard live on Broadway, thanks to a songwriting couple who live and work in harmony. Mo Rocca has paid them a visit:

When the husband-and-wife songwriting team Bobby and Kristen Lopez won this year's Oscar for Best Original Song (this time for "Remember Me," from the movie "Coco"), they made sure to thank their very special guests: "And our daughters, Katie and Annie, who are here with us tonight, your love and creativity inspire everything we do."

Inspire, indeed. It's no coincidence that the Lopezes' new Broadway show centers around two sisters.

Rocca asked, "Could you have written 'Frozen' if you didn't have two daughters?"

"Frozen," the stage adaptation of the 2013 animated blockbuster, is the story of Anna and her big sister, Elsa. It's a sibling dynamic Bobby and Kristen have observed firsthand.

"Katie was the older child and Annie just worshipped her," Robert said. "I remember asking her what she wanted to be when she grew up, about age two, and she said, 'Katie.'"

The couple met in 1999 at a songwriting workshop. Bobby performed a number from a puppet musical he was then writing.

Kristen said, "I gushed in the biggest, most musical theater jazz hands-y way of, like, 'Oh, my God, you're amazing. You're such a genius. I've never seen anything this exciting!' I just was really over the top about it."

"That had to feel good," said Rocca.

"Oh, yeah!" replied Robert. "You know, I was living with my parents at the time writing a puppet musical!"

"He was a bit of a fixer-upper," Kristen added."

"Surprisingly, I did not have a girlfriend and was looking for one," he laughed.

They began dating, but Kristen said when they first met she had to constantly call him, "and being like, 'Just put the pencil down. Come out and have some fun,'" she laughed. "It will be so fun!"

"I actually said, 'I'm really busy and maybe we could see each other on Fridays?'" he laughed.

"Boy, what a romantic," Rocca said.

"Yeah," Kristen said. "And then what I said was, 'You know, there's a fine, fine line between love and a waste of time,' and I broke up with him."

That puppet musical would become the Tony Award-winning "Avenue Q," and at an early performance, Kristen found that Bobby had taken her "fine, fine" breakup line and put it to music:

Robert said, "At the reading of that, my mother was sitting behind her. We were broken up at the time. And she just whispered, 'That's about you.'"

"She did!" Kristen confirmed.

And what was her reaction? "My whole body turned sort of hot and red. I was like, 'He just put our breakup into his musical that he invited me to! And I think this is his way of trying to get me back.' And it worked!"

And that's how it's been for the Lopezes ever since. They make a living writing songs -- Kristen the words, Bobby the music -- and for them, songs are just a part of living.

So, when their first daughter was born, well, they couldn't not write a lullaby…

"He said, 'I have this idea of a song, I was feeling it.' And then we totally collaborated over her sleeping infant body."

"But the lullaby was just written for the family. You act like that's a given."

I love you
I mean, I just adore you.
I wanna do things for you, all my life.
I love you, I'm not just being sappy,
I wanna make you happy all my life.
Oh, what do other people do, people who don't have you?
They're unfortunate indeed, should we tell them? No, no need.

Katie is now 12 and Annie is 8. Who better to tell Rocca what "Frozen" is really about?

He asked, "I don't have sisters. So, can you explain to me the relationship between Elsa and Anna?"

"Anna is really, really, really trying to be best friends to Elsa," said Katie. "And I think that's something that a lot of sisters sort of identify with."

"Annie, does this ring true to you?"

"Katie always has, like, playdates or sleepovers with her friends, and I feel pretty left out, Katie!" Annie laughed.

"My response is, Annie, I'm sorry about that!"

Of course, we had to talk about that song.

Katie said, "I think it's just a very freeing song. And it can really put you in a good mood, and everybody can wish they could sing."

Fans of "Let It Go" might like to know that it was on a walk in Brooklyn's Prospect Park that the song's hook first came to the couple: Kristen demonstrated for Rocca how the words came to her, perched atop that very same picnic table:

To find out how Kristen Lopez found inspiration for "Let It Go" on a Brooklyn picnic table, watch the video below:

On stage, Elsa and Anna are played by Caissie Levy and Patti Murin. They admit that they've spotted Bobby and Kristen watching them perform. "We see it a little bit," said Levy.

"It's kind of like watching parents at the Olympics hoping that the kid lands a triple axel?" Rocca asked.

"And we want to make them happy," Levy added.

That Oscar-winning song they wrote for "Coco" turned out to be the perfect expression of Bobby's love for his mother, when she died last year.

Remember me,
though I have to say goodbye,
remember me,
don't let it make you cry.
For even if I'm far away
I hold you in my heart,
I sing a secret song to you
Each night we are apart.

He sang it at her funeral … and for Rocca at the piano in their living room. Words and music, life and song. Collaborators for life.