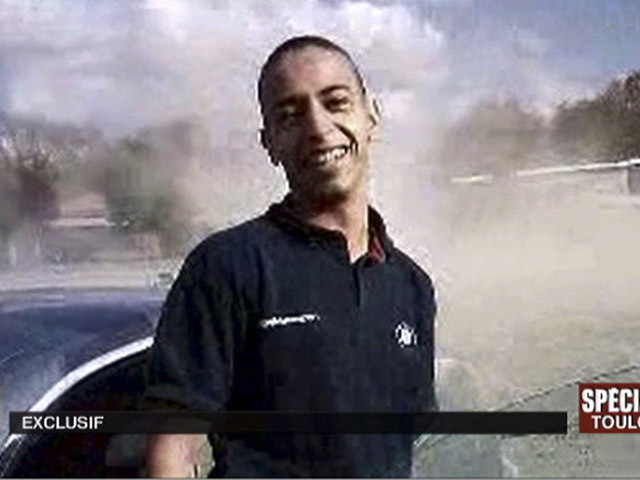 (AP) PARIS - Just a few weeks ago, Mohamed Merah partied at a nightclub, and an acquaintance noticed nothing out of the ordinary. Another friend said the former car body shop worker liked to talk about "cars, bikes, girls and sports."

On Wednesday, both friends stood stunned near a huge police cordon in a blue-collar neighborhood in the southwestern city of Toulouse, where negotiators were trying to get Merah to surrender.

The 24-year-old Frenchman of Algerian descent died Thursday after a more than 32-hour standoff with an elite police squad ended with him jumping from his window, gun in hand, in a fierce shootout with police, a French minister said. He was suspected of killing three Jewish children, a rabbi and three paratroopers in three separate attacks in southern France.

Prosecutor Francois Molins told reporters that Merah was a self-taught Salafi Muslim who had been to Afghanistan twice and had trained in the Pakistani militant stronghold of Waziristan. Salafis have an ultraconservative approach to Islam. He also had a long criminal record, the prosecutor said, adding that the suspected gunman's brother had been implicated in a 2007 network that sent militant fighters to Iraq.

Just before police swarmed around the apartment in the pre-dawn darkness, Merah called a French television journalist and calmly took responsibility for all of the attacks — saying he carried them out to protest France's ban on veils in public places, the nation's military presence in Afghanistan and in revenge of the deaths of "Palestinian children."

Molins confirmed that Merah told authorities he made the call to Kalondo.

But according to the acquaintance at the nightclub, Mehdi Nedder, nothing about Merah's social life in Toulouse before the French attacks made him stand out as a radical bent on sowing terror — or even that he had radical leanings.

"Three weeks ago he was in at a nightclub," Nedder told The Associated Press. "And this morning I hear we're talking about al Qaeda. How can you change like that in three weeks?"

A friend of Merah's who would only identify himself by his first name, Kamel, recalled playing soccer with him as the two grew up in Toulouse.

"(He) was respectful and generous," said Kamel, 24. "We never spoke about weapons, religion or politics, but cars, bikes, girls and sports."

Police detained Mehdi's mother and brought her to the standoff scene to try to get her to negotiate Wednesday with her son, but she declined, saying she had no control over him, French authorities said.

As a teenager, Merah got caught up in petty crime, some of it involving violence, said his lawyer, Christian Etelin. But Etelin said the recent wave of deadly shooting attacks didn't fit the profile of the suspect he first represented in 2004.

"He was a polite and courteous boy" who used to work in a body shop, Etelin said.

The lawyer added that if Merah had dark secrets, "it remained clearly secret. He gave the impression of being in French social life."

However, Etelin also said he was aware that Merah had been monitored by authorities after he made a visit to Afghanistan two years ago.

Western officials have been concerned for years about Muslim militants with European citizenship visiting northwestern Pakistan, possibly training for missions that could include terror attacks in Europe where they would act as "lone wolves" or on the orders of others. In 2010 alone, dozens were believed to be there.

French authorities did not say whether they were aware that Merah had been training with militants before the attacks in France that began March 11 — or if they learned of the training after they closed in on him.

A person of the same name was arrested in southern Afghanistan five years ago and escaped from his prison cell in Kandahar province in a 2008 mass Taliban jailbreak, according to Kandahar provincial spokesman Ahmad Jawed Faisal. However, Faisal says their records also show that Merah was an Afghan citizen from Kandahar province.

In neighboring Germany, which regularly tracks extremists who head to Afghanistan or Pakistan for paramilitary training, a senior intelligence official said that he had never seen Merah's name come up. He spoke on condition of anonymity because he was not authorized to discuss the issue with the media.

American officials have kept in close contact with French authorities as the killings of soldiers and Wednesday's standoff evolved, and are now "working to determine what the suspect's ties to al Qaeda might be," a U.S. official said, speaking on condition of anonymity because the investigation was ongoing.

British officials want to know whether Merah "was simply affiliated with a group, or whether someone in a group was giving him specific instructions," said a British official who spoke on condition of anonymity because of the sensitivity of his job. "At this stage, that doesn't appear to be the case but it's still in early days."

Merah's criminal record was mostly for petty offenses. Etelin said Merah was in prison from December 2007 to September 2009 for a mugging. The lawyer tried to get the sentence reduced or converted, but failed, and he speculated that could have "provoked hate for the justice system" and "laid the groundwork from which he threw himself into this religious fanaticism."

His last conviction came Feb. 24 for a minor motorcycle accident and driving without a permit, his lawyer said. He was sentenced to a month in prison, and was supposed to appear before a judge to have the sentence finalized and start serving April 3 or 4.

Etelin said he knew Merah since he was about 17, and described his life as typical for many teenagers and young men in poor French housing projects who get involved in criminal activity.

"His mother couldn't control him, his father was totally absent, his sister ... also told me that she couldn't exercise any influence over him," the lawyer said.

Etelin last saw Merah in February, and "found him like someone who had gained in maturity."

But Merah "did not give the impression of someone hatching plans, retaining violence, absolutely not the air of someone letting you think of a certain fanaticism. Not at all."