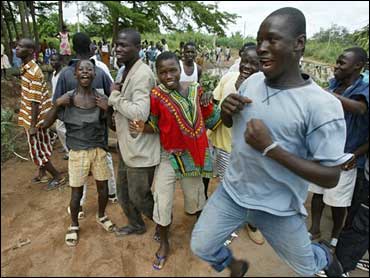 France rolled out overwhelming military might Sunday to quell an explosion of anti-French violence in Ivory Coast, the pride of its former West African colonial empire, deploying troops, armored vehicles and helicopter gunships against machete-waving mobs hunting for foreigners.

In the second of two violent days that stood to alter French-Ivory Coast relations — and perhaps Ivory Coast itself — French forces summarily seized strategic control of Abidjan, commandeering airports and posting gunboats at bridges in the country's largest city and commercial capital.

French military helicopters swept in at one point to rescue a dozen trapped expatriates from the rooftop of what was once a luxury hotel, flying them and their suitcases to safety.

The slain French soldiers were among 4,000 French peacekeepers and 6,000 U.N. troops in Ivory Coast, divided between rebel north and loyalist south since civil war broke out in September 2002.

Today, peacekeepers man a buffer zone between the rebel south and loyalist north, trying to hold together a nation whose stability is vital to a region recovering from a spate of devastating civil wars in the 1990s.

On Sunday, loyalist mobs rampaged in a second day of looting and burning in outrage at the swift French payback.

Gunshots echoed and smoke billowed over Abidjan and the capital, Yamoussoukro, as thousands-strong crowds laid waste to foreign and locally owned businesses and searched house to house for foreigners. Mobs set alight tires in fiery roadblocks.

An Associated Press reporter watched as a crowd clutching machetes and iron bars entered one neighborhood, demanding if any French lived there.

"If there are any whites in this neighborhood, we're going to get in and them," one man shouted.

"It's better to kill the whites than steal their stuff," another yelled.

About 14,000 French citizens live in Ivory Coast, the world's top cocoa producer and until the 1990s, West Africa's most stable and prosperous nation. In Abidjan, they crouched in their homes.

"We are all terrified, and try to reassure each other," one French resident said by telephone from his home. He spoke on condition his name be withheld.

"We have been told by the embassy to stay at home ... It is a difficult situation to live through," he said.

Abidjan's hundreds of thousands of immigrants from neighboring Muslim nations hid as well.

"We're afraid because who knows, maybe this is civil war," said one man, who would identify himself only as Ouedraogo, holed up in a mosque with about 30 others.

The Red Cross said it treated about 150 people wounded in the violence, most of them injured by bullets. It had no figures on deaths. State TV showed the bodies of what it said were five loyalists.

French helicopters fired percussion grenades to break up mobs holding the bridges and laying siege to the French military base in Abidjan.

France landed 300 reinforcements Sunday at Abidjan's international airport, in French hands since a gun battle with Ivory Coast forces a day earlier. More heavily armed reinforcements rolled south from Yamoussoukro, and another 300 troops were on their way from France.

Fearing attempts to overthrow Gbagbo, loyalist leaders called on followers to surround the presidential mansion in a "human shield."

Gbagbo, installed as president by a street uprising amid an aborted 2000 vote count, stayed out of sight after the crushing French military response.

His spokesman told The Associated Press that Ivory Coast was willing to cease fire, and immediately pull forces from the peacekeeper-controlled buffer zone, three days into a government-led offensive that broke a more than year-old cease-fire.

Ivory Coast will ask the U.N. Security Council for action against France, presidential spokesman Desire Tagro said. "We are faced with aggression by one country against another country. We are going to inform the entire world ... that France has come to attack us."

"In no way is France there to destabilize Ivory Coast and its institutions or take sides," the French Foreign Ministry said in a statement. "It is above all concerned with preserving constitutional legality. There is no hidden agenda."

While admired by his violently devoted followers, Gbagbo is widely accused by critics of fanning ethnic, political and regional hatreds in Ivory Coast since a 1999 coup ushered in instability and repeated violence.

A peaceful Ivory Coast is seen as essential to a region pulling out of 1990s civil wars, and the unprecedented confrontations on Saturday and Sunday raised worries of more upheaval ahead.