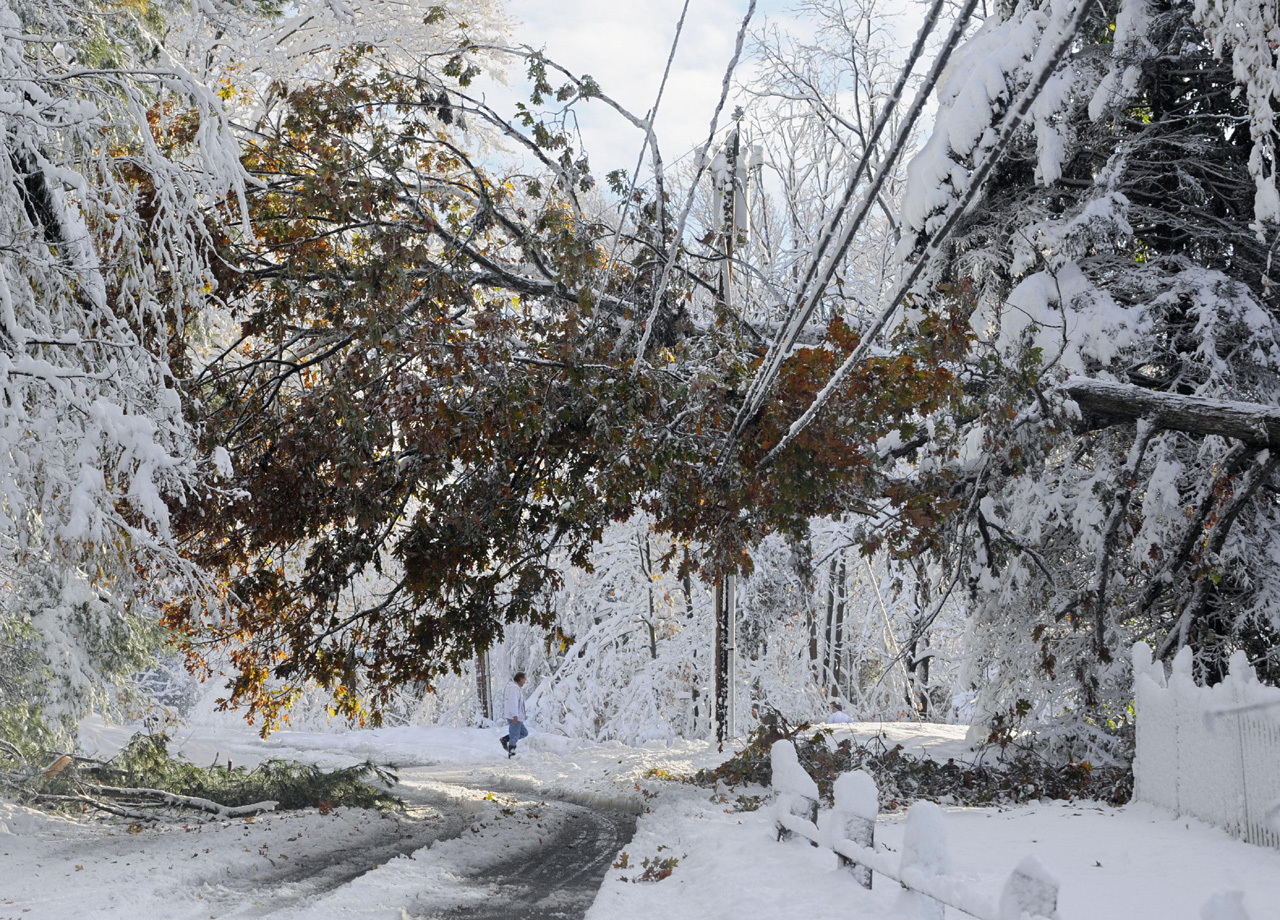 A freak October nor'easter knocked out power to more than 3 million homes and businesses across the Northeast on Sunday in large part because leaves still on the trees caught more snow, overloading branches that snapped and wreaked havoc. Close to 2 feet of snow fell in some areas over the weekend, and it was particularly wet and heavy, making the storm even more damaging.

From Maryland to Maine, officials said it would take days to restore electricity, even though the snow ended Sunday.

The storm smashed record snowfall totals for October and worsened as it moved north. Communities in western Massachusetts were among the hardest hit. Snowfall totals topped 27 inches in Plainfield, and nearby Windsor had gotten 26 inches by early Sunday.

It was blamed for at least 11 deaths, and states of emergency were declared in New Jersey, Connecticut, Massachusetts and parts of New York.

Roads, rails and airline flights were knocked out, and passengers on a JetBlue flight were stuck on a plane in Hartford, Conn., for more than seven hours. And while children across the region were thrilled to see snow so early, it also complicated many of their Halloween plans.

Sharon Martovich of Southbury, Conn., said she hoped the power will come back on in time for her husband's Halloween tradition of playing "Young Frankenstein" on a giant screen in front of their house. But no matter what, she said, they will make sure the eight or so children who live in the neighborhood don't miss out on trick-or-treating.

"Either way we will get the giant flashlights and we will go," she said.

More than 800,000 power customers were without electricity in Connecticut alone -- shattering the record set just two months ago by Hurricane Irene. Massachusetts had more than 600,000 outages, and so did New Jersey -- including Gov. Chris Christie's house. Parts of Pennsylvania, New Hampshire, New York, Maine, Maryland and Vermont also were without power.

"It's going to be a more difficult situation than we experienced in Irene," Connecticut Gov. Dannel P. Malloy said. "We are expecting extensive and long-term power outages."

Thirty-two shelters were open around the state, and Malloy asked volunteer fire departments to allow people in for warmth and showers. At least four hospitals were relying on generators for power.

Around Newtown in western Connecticut, trees were so laden with snow on some back roads that the branches touched the street. Every few minutes, a snap filled the air as one broke and tumbled down. Roads that were plowed became impassible because the trees were falling so fast.

One of the few businesses open in the area was a Big Y grocery store that had a generator. Customers loaded up on supplies, heard news updates over the intercom, charged up their cell phones, and waited for a suddenly hard-to-get cup of coffee -- in a line that was 30 people deep and growing.

Many of the areas hit by the storm had also been hit by Irene. In New Jersey's Hamilton Township, Tom Jacobsen also recalled heavy spring flooding and a particularly heavy winter before that.

"I'm starting to think we really ticked off Mother Nature somehow, because we've been getting spanked by her for about a year now," he said while grabbing some coffee at a convenience store.

It wasn't just the trees that weren't ready for a wintry wallop.

Kerry McNiven said she was "totally unprepared" for the storm that knocked out her water and power and sent tree limbs crashing into her Simsbury, Conn., home. She was buying disposable plates and cups in a darkened supermarket, a setting that she said resembled "one of those post-apocalyptic TV shows."

"They didn't hype this one as much" as Irene, she said. "I didn't think it was going to be as bad."

In Concord, N.H., Dave Whitcher's company had yet to prep its sanding equipment before the storm dropped nearly 2 feet of snow. His crews were plowing and shoveling parking lots Sunday and would be back Monday to salt sidewalks and walkways.

"It was a bit of a surprise, the amount and how heavy it was. We should've probably come out and got a little earlier start, but we did all right," Whitcher said.

Vaccaro, the weather service spokesman, said the snowstorm "absolutely crushed previous records that in some cases dated back more than 100 years." Saturday was only the fourth snowy October day in New York's Central Park since record-keeping began 135 years ago.

There usually isn't enough cold air in the region to support a nor'easter this time of year, but an area of high pressure over southeastern Canada funneled cold air south into the U.S., Vaccaro said. That cold air combined with moisture coming from the North Carolina coast to produce the unseasonable weather.

A few businesses enjoyed the early snow: Ski resorts in Vermont and Maine opened early. But it was more commonly an aggravation.

Many residents were urged to avoid travel altogether. Speed limits were reduced on bridges between New Jersey and Pennsylvania. A few roads closed because of accidents and downed trees and power lines, said Sean Brown, a spokesman for the Pennsylvania Department of Transportation.

The JetBlue passengers stranded Saturday at Hartford's Bradley International Airport were on a flight from Fort Lauderdale, Fla., to Newark, N.J., that had been diverted. Passenger Andrew Carter, a football reporter for the Sun Sentinel in Fort Lauderdale, said the plane ran out of snacks and bottled water, and the toilets backed up.

JetBlue spokeswoman Victoria Lucia said power outages at the airport has made it difficult to get passengers off the plane, and added that the passengers would be reimbursed. In 2007, passengers in JetBlue planes were stranded for nearly 11 hours at New York's Kennedy Airport following snow and ice storms.

There were other flight delays in the region over the weekend, and commuter trains in Connecticut and New York were delayed or suspended because of downed trees and signal problems. Amtrak suspended service on several Northeast routes, and one train from Chicago to Boston got stuck overnight in Palmer, Mass. The 48 passengers had food and heat, a spokeswoman said, and they were taken by bus Sunday to their destinations.

Five people died in Pennsylvania because of the storm, two each in car accidents in suburban Philadelphia. An 84-year-old Temple man was killed Saturday when a snow-laden tree fell on his home while he was napping in his recliner.

The snow was a bone-chilling slush in New York City, and a taste of what's to come for demonstrators camping out at Zuccotti Park in lower Manhattan for the Occupy Wall Street protest.

Nick Lemmin, of Brooklyn, spent his first night at Zuccotti in a sleeping bag in a tent, wearing thermals, a sweatshirt and a scarf.

Lemmin said he thought the early snow was actually "a good test." But it was too much for protester Adash Daniel, who had already been in the park for three weeks.

"I'm not much good to this movement if I'm shivering," Daniel said as he left.

There was much more snow in Concord, where 9-year-old Nate Smith and his brother had fun making a snowman. But Nate wasn't sure he'd be able to go trick-or-treating Monday. Even if he did, his werewolf costume could end up looking a little different than he had imagined.

"I might have to put on snow pants," he said.