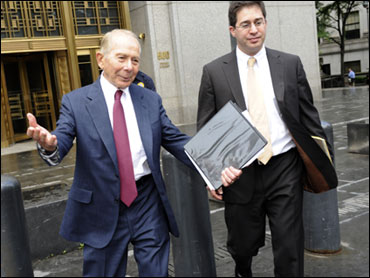 Francis Cianfrocca is a Senior Editor of The New Ledger.
Here is an amazing fact: nearly a year after perhaps the most sensational corporate collapse in the history of finance, a collapse that, without the intervention of the government, would have led to the bankruptcy of every major American financial institution, plus a lot of foreign ones, too, A.I.G.'s losses and the trades that led to them still haven't been properly explained. How did they happen? Unlike, say, Bernie Madoff's pyramid scheme, they don't seem to have been raw theft. They may have been an outrageous departure from financial norms, but, if so, why hasn't anyone in the place been charged with a crime? How did an insurance company become so entangled in the sophisticated end of Wall Street and wind up the fool at the poker table? How could the U.S. government simply hand over $54 billion in taxpayer dollars to Goldman Sachs and Merrill Lynch and all the rest to make good on the subprime insurance A.I.G. F.P. had sold to them-especially after Goldman Sachs was coming out and saying that it had hedged itself by betting against A.I.G.?

Michael Lewis's piece on AIG at Vanity Fair is getting linked all over today. AIG is going to go down in history as one the great disasters of all time, but I'm having a hard time discerning the case for fraud.

Their business was writing credit-default swaps. You commit to someone that you'll make him whole in case some security he holds experiences any of a range of events constituting a technical default. It's a fascinating idea because it has the effect of transferring risk to people who may be able to carry it less expensively and thus more efficiently. This is exactly the kind of thing that, in theory, makes more capital available to build up real economies and create jobs.

The first problem with that, is the reason for the capital efficiency. It's basically a regulatory arbitrage rather than something arising organically from the real world. So I have questions whether durable and capturable economic value was created here.

The other problem is that the risks themselves are poorly understood. At this point in the story, you have to consider that AIG became the focus of a problem that wouldn't have been any less bad without them. Because what happened is that every financial asset in the world (except US Treasury debt) collapsed in value at precisely the same moment. No one really knows how the hell that kind of thing happens. It's against all the theory. If you don't understand it, the most prudent thing you can do is assume it can happen every day instead of once a decade. And that means you're using capital very inefficiently, every day. (As I never tire of pointing out, that's why I've been calling for a depression-like future for two years now.)

Now it turns out that AIG was suddenly on the hook for counterparty maintenance payments as all this happened. With a CDS, as with any kind of a swap, both parties are required to pay each other money every day or twice a day as the value of the contract changes. (This is intended to insure performance in case of a default. It's one of the innovations that came out of the 1998 Long-Term crisis, and was ironically intended to isolate credit risk, precisely to avoid a systemic crisis.) When AIG's whole portfolio dropped in value, they suddenly found themselves facing contractual obligations to pay out $80 billion. These obligations materialized literally during the course of a single day, Monday, September 15.

That's what sunk AIG. But consider what would have happened without them. A CDS is a zero-sum instrument. If AIG hadn't protected the various mortgage-security portfolios around the world, their holders would have subjected to the same hits to capital that AIG was. Except it would have resulted in hundreds or thousands of undercapitalized banks rather than just AIG.

Did AIG make the problem worse? That's a damned interesting question. By making it possible for their counterparties to expand their balance sheets beyond what their capital would otherwise have permitted, you could argue that they did indeed. Another question is: could the various regulatory authorities have exercised forbearance to allow undercapitalized institutions to operate through the several days of extreme crisis without a default event like the one the Fed committed AIG to? Perhaps.

By Francis Cianfrocca:
Reprinted with permission from The New Ledger