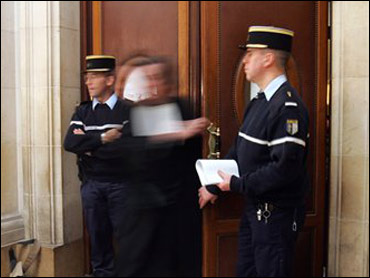 A French court convicted six men Tuesday in an alleged plot inspired by al Qaeda to send a suicide bomber into the U.S. Embassy in Paris, closing a six-week trial that shed light on the spread of Islamic radicals in Europe.

The court gave a maximum 10-year prison sentence to the ringleader, Djamel Beghal, 39, whose arrest in 2001 in Dubai, on his way out of Afghanistan, apparently thwarted the plot.

Kamel Daoudi, 30, a computer whiz, was given a nine-year sentence for what the prosecution said was his liaison role with al Qaeda figures in Afghanistan commandeering the embassy operation. The four other defendants were handed prison sentences ranging from one to six years.

All six were convicted of "criminal association in relation with a terrorist enterprise," a charge commonly used in terrorism cases in France that, because of its sweeping nature, can facilitate conviction.

Each denied any connection to a terror plot. The lawyers for Beghal and Daoudi said they would appeal.

"Proof, we have none. There are no documents, no conversation," said Beghal's lawyer, Jean-Alain Michel. He denounced the trial as a "judicial parody."

"If I dare say so, we have our judicial Guantanamo," Michel added, referring to the U.S. military base in Cuba where alleged enemy combatants are held.

However, the prosecution argued that Beghal was part of a web of Islamic militants stretching across five European countries with the center of gravity in Afghanistan.

The investigation was opened Sept. 10, 2001, a day before the terror attacks on the United States, and revealed what amounts to a new generation of Islamic militants in France, distinct from Algerian Islamic insurgents responsible for deadly Paris bombings in the mid-1990s.

"This affair is revelatory of a Europeanization of terror groups," prosecutor Christophe Teissier said in his six-hour closing arguments.

Some 20 people are under investigation in the Chechen case, most arrested in late 2002. The new arrests were made in Grenoble and the Lyon suburb of Venissieux, home to four members of a single family implicated in the plot, the officials said.

The Paris trial largely hinged on a confession by Beghal to authorities in the United Arab Emirates after his July 2001 arrest. However, he retracted the confession after his extradition to France in September 2001, and testified that it had been extracted through torture that included the insertion of instruments like knitting needles into his genitals.

Two other men later convicted in related cases in Belgium and the Netherlands were Beghal's friends.

Among them was Nizar Trabelsi, a Tunisian convicted in Belgium in September 2003 after admitting to plans to drive a car bomb into a Belgian air base where U.S. nuclear weapons are believed stored. Trabelsi was allegedly to serve as the suicide bomber in the embassy plot.

The prosecution claimed the plot to attack the U.S. Embassy was concocted in Afghanistan with leading al Qaeda lieutenant Abu Zubaydah, who was captured in March 2002. Beghal denied, at the trial, ever having met the Saudi-born Palestinian said to be a link between bin Laden and many of al Qaeda's operational cells.

The well-educated Daoudi, a computer expert arrested in Britain, where he had fled before a police sweep in France, was to send information about attack plans to Afghanistan via the Internet — and get the green light for the attack in the same way.

Of the four other defendants, Nabil Bounour, and Abdelkrim Lefkir, both 34, were given six-year prison terms. Bounour, of Algerian origin, was also forbidden to return to France once his sentence is served. Lefkir had his civil rights suspended for 10 years, a common punishment in France.

Rachid Benmessahel received a three-year prison term, while Johan Bonte, Beghal's brother-in-law, was sentenced to one year behind bars.