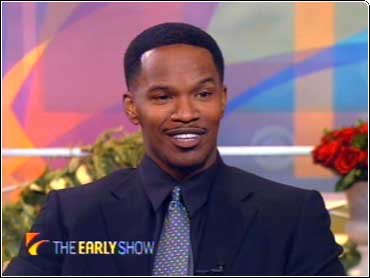 Actor Jamie Foxx has covered a lot of positions, from stand-up comedian, to star of his own television show to a lead role in the Oliver Stone ode to football, Any Given Sunday. In the film, Foxx plays "Steamin'" Willie Beamen, the new quarterback for coach Al Pacino's stumbling football team.

"It's not only about football, but life, and the different struggles people have dealing with success," Foxx said. "Cameron Diaz plays a great role. All the women in the movie play strong characters."

Foxx said sitting across from Al Pacino was a little intimidating until Pacino broke from character and told Foxx he is a "great actor".

He said Oliver Stone brought everything out of him that he needed to do the role.

"I call him the diabolical genius," Foxx explained. "[Stone] didn't care who you were. He was about the body of work. The way he shot was terrific."