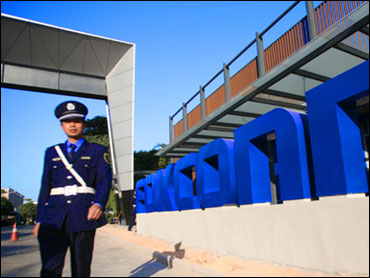 Foxconn Technology, a supplier to Apple Inc., looks ready to build a huge new factory in north-central China despite the company's own misgivings about city-sized manufacturing facilities after a spate of suicides among its young migrant work force.

The company plans to recruit some 300,000 workers for the new plant, to be located in the Henan city of Hebei, according to a notice seen Tuesday on a local government website.

A spate of worker suicides at an enormous Foxconn complex in the southern boomtown of Shenzhen has drawn attention to the stress many young workers face working in some factories. It also has coincided with a spate of strikes and wage protests at other factories, especially those of Japanese automakers.

Calls to Foxconn's spokesman in China rang unanswered. A company official in Taiwan's capital Taipei, who refused to give his name, said he could not comment because any expansion plan would require approval by the company's board of directors.

Foreign companies that rely on China as a source of cheap labor are finding it harder to attract and keep workers, who have begun demanding significantly better pay and working conditions.

China has been pushing Taiwan, Hong Kong and other foreign investors to focus more on building manufacturing plants in inland regions closer to where most migrant workers come from.

Taiwan-based Foxconn makes iPads and iPhones for Apple and also makes computers for Dell and Hewlett-Packard Co. The company denies allegations that it runs excessively fast assembly lines and demands too much overtime, but it recently announced two pay hikes that more than doubled basic worker salaries to 2,000 yuan ($290) a month.

Terry Gou, chairman of Foxconn's parent company Hon Hai, recently told shareholders that the company has sought to compensate for a lack of basic social services by building dormitories and recreational facilities. He said the company's existing China factory model may not be sustainable.

The information posted on the Hebei city website says workers would be paid a basic wage of 1,200 yuan ($176) a month during their three-month probation period, with total income up to 2,300 yuan ($340).

Overtime would be limited to three hours a day, with one day a week guaranteed off, it says.

The cost of living in Henan and other inland provinces tends to be lower than in Shenzhen. Henan's minimum wage will be 800 yuan (about $120) per month as of July 1.

China has about 150 million migrant workers, two-thirds of them between the ages of 16 and 30.