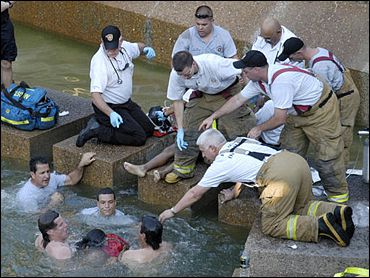 Four members of a Chicago church group — including three children — drowned in a Fort Worth water park when one child jumped or slipped into a pool not designed for swimming and the others dived in to try to save her.

The victims were two girls, a boy and a man, all visiting Fort Worth for a bible school convention, reports Bob Crowley of CBS radio affiliate KLBJ-AM. Their hotel pool was closed for cleaning and it's thought that's why the kids went into the Water Gardens' 12-foot-deep center pool.

The Rev. Gerald M. Dew, pastor of Antioch Missionary Baptist Church in Chicago, identified those who drowned Wednesday as Myron Dukes, 35; his daughter Lauren Dukes, 8; his son Christopher Dukes, 13; and an unrelated 11-year-old girl, whose name was not released pending family notification.

Dot Kent, a spokeswoman for the city of Fort Worth, said "no swimming" signs are posted in the park and near the pool. She said she understood that the little girls had on swimsuits when their bodies were recovered.

Witness accounts varied on what happened. Apparently, Lauren Dukes jumped or slipped into the water. The other girl fell in when she tried to reach in and help her. Lauren's father and brother then jumped in to try to save the girls.

Stephanie Johnson and her daughter tried to save the girls but couldn't. She told Crowley would-be rescuers Christopher and Myron Dukes were pulled under by the swirling waters.

"I think the suction had pulled them all down, and it was too late," she said.

A pump at the bottom of the pool that pulls water to a waterfall apparently created a suction that made rescues difficult, Fire Department spokesman Lt. Kent Worley said.

"A young person would not have the strength or the knowledge of how to get away from it," he said.

Jesse Spann, one of the church's deacons, said there are no barriers around the area and that steps lead down to the swirling pool. "As a child, when you see a waterfall, you think you can go play and swim there," he said.

One witness, Christian Tillis, 14, was standing at the top of the fountain area with his brother and friend when they saw the girls go into the water.

"I dived in after them. I felt a little-bitty hand, but it slipped out," Tillis said. "And then I had to get out because I couldn't breathe."

All four victims were in town for the five-day National Baptist Sunday School convention. At the hotel, church members gathered in a conference room to hug, cry and pray. Gospel hymns played on a tape recorder.

Worley said the Water Gardens would remain closed until police finish investigating the drownings. A memorial ceremony was planned for Thursday at the park.

Designed by architects Philip Johnson and John Burgee, the gardens are free to enter and a common refuge from hot Texas days. Worley said in the park's 30-year history, "we have never had an incident such as this."

Standing before his teary-eyed church members in the hotel conference room, Dew struggled to find the words that would console his flock following the tragedy.