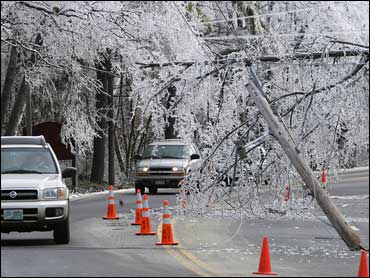 Joined by people seeking shelter from the bitter cold, parishioners at the Jaffrey Bible Church on Sunday thanked God for a warm place to sleep and for the utility crews struggling to repair power lines snapped by the devastating ice storm that hit the northeastern New England states.

"Your fellow Jaffrey residents have stepped up and made this a more bearable situation," Walt Pryor, recreation department director for the town of 5,700, told the congregation of about 150 people Sunday morning.

The church in the town, 15 miles from the Massachusetts state line, had been turned into a shelter, with cots and mattresses set up in offices and hallways, and televisions and 1,000-piece jigsaw puzzles for children in the basement. Donated food was plentiful, including lobster casserole, pot roast, and barbecued chicken.

Roughly 649,000 customers were still without power Sunday morning in upstate New York, Massachusetts, New Hampshire, Vermont and Maine. Utilities in hardest-hit New Hampshire said power might not be totally restored to the region until Thursday or Friday.

Emergency management officials reported four storm-related deaths. One man in New Hampshire and a couple in New York state died of carbon monoxide poisoning from home generators. The body of a Massachusetts public works supervisor who went missing while checking on storm damage was recovered from a reservoir.

Officials warned there could be more outages as drooping branches shed ice and snap back to their original positions, potentially taking out more power lines.

Adding to the misery of downed power lines and property damage, temperatures dropped into the teens and 20s Fahrenheit early Sunday, with single-digit readings in parts of New Hampshire and Maine. Fryeburg, Maine, hit a low of just 2 degrees above zero F. Warmer weather was on the way for Monday.

The number of people at shelters in Massachusetts nearly doubled to 1,800 Saturday night as people faced another night without lights and heat. Nearly 1,300 people stayed at 56 shelters in New Hampshire.

Crews across the region reported the ice had destroyed utility poles, wires and other equipment, but said the extent of damage was unclear because some roads still were impassable.

(AP /Steve Hooper, Keene Sentinel)
(Richard Sims walked and hitched a ride from Harrisville, N.H., to fill up two cans of gas to keep his generator going. He waits on line amongst cars in Dublin, N.H., Friday, Dec. 12, 2008.)

About 300 National Guardsmen were deployed in New Hampshire, mostly in Stoddard, 27 miles north of Jaffrey, to help with debris cleanup.

Despite the difficulties, utilities were making progress with help from utility crews from Canada and as far away as Virginia and Michigan.

At the peak of the storm more than a million customers were without electricity, reports CBS News correspondent Bianca Solorzano. A rise in temperatures Sunday, all the way into the 40s, is thawing things out, but still…

In New Hampshire, more than 200,000 are still in the dark. In Massachusetts and New York, more than 150,000 in each state were without power. And there are tens of thousands of customers in Maine still waiting for power to be restored.

Meanwhile, in the Dakotas, an area accustomed to winter weather, got hit hard by an early blizzard.

"Hey this is North Dakota! We're not wusses, come on!" said one brave resident.

Wind gusts of more than 50 miles per hour, make it feel like 50 below, Solorzano reports. In some areas blowing snow dropped visibility so severely that two interstates and many major highways were shut down.