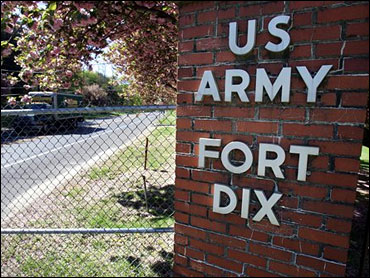 An electronics store clerk credited with providing the tip that broke up an alleged plot to kill soldiers at Fort Dix in New Jersey went public Tuesday, saying he spent a day pondering his suspicions before going to authorities last year.

Speaking on CNN's "American Morning," Brian Morganstern described how two men brought him a videotape to transfer to a DVD in late January 2006.

He said he went home from his Circuit City store that night and told his family what he had seen on the video: Ten men at a firing range with handguns, rifles and what he thought were fully automatic rifles. Authorities later said they were chanting "God is Great" in Arabic.

He said he did not know if he should breach the privacy of the customers, who seemed like ordinary guys.

"It was more of a moral dilemma at that point," Morganstern told CNN.

The next day, he said, he talked to his managers at the Mount Laurel store, then called police, sparking a 15-month investigation that led to the arrests on May 7 of six men accused of plotting the attack on the Army installation being used largely to train reservists bound for Iraq.

First, Mount Laurel police visited the Circuit City to see the video. They asked Morganstern to make a copy, which was passed on to state Homeland Security investigators, then the FBI.

In about a month, an FBI informant had infiltrated the alleged plot.

Authorities said they made the arrests just as the suspects were trying to purchase fully automatic weapons in a buy facilitated by an FBI informant.

The suspects are all foreign-born men in their 20s who had spent many years living in Philadelphia's southern New Jersey suburbs. Five are charged with conspiring to kill military personnel and could face life in prison if convicted. The sixth faces up to 10 years in prison if he is convicted of weapons charges. Four of the suspects are ethnic Albanians from the former Yugoslavia, one is from Turkey, and one from Jordan.

After the arrests three weeks ago, authorities praised the electronics clerk who had given them the initial tip. But, citing safety concerns and the integrity of the investigation, neither they nor store officials would reveal the employee's identity.

Circuit City has said there were actually two employees who made the tip. The other has not been named publicly, and officials have not detailed what role that person played.

Morganstern told CNN the U.S. Attorney's Office had asked him not to divulge certain details from the video.

The clerk, who remained anonymous until his interview Tuesday, was celebrated as a hero by officials and in the media across the country. He received a proclamation of thanks from the Mount Laurel Police Department.

But that is not how Morganstern sees his action:

"I don't feel like a hero," he said. "I feel like I did the right thing, but I think the real heroes are the men and women overseas and the people in our law enforcement who handled the situation."