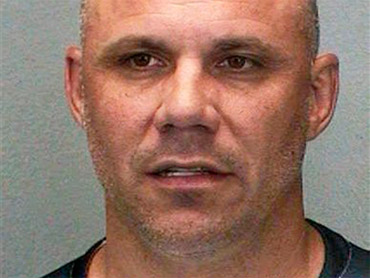 DAVIE, Fla. (AP) Former major leaguer Jim Leyritz was arrested Thursday in South Florida on charges of domestic battery against his ex-wife, just two months before his trial on a DUI manslaughter charge was set to begin.

Leyritz, 45, was arrested at his home in Davie, a Fort Lauderdale suburb, a police report said. He was being held in the Broward County Jail.

Leyritz's ex-wife, Karrie, gave conflicting reports of what happened, according to a police officer who responded to a domestic disturbance at the house. She first told police they were arguing over child support when he struck her twice in the face and pushed her to the ground for writing a check without his permission. She later said her ex-husband dragged her out of bed and pushed her against the wall.

He told police she was drunk and hurt herself to get back at him for trying to evict her from the house they share.

The couple has three children who were sleeping when officers arrived, the report said.

This is not the first bout of trouble for Leyritz.

He is scheduled to go on trial in September for allegedly killing a woman with his car. Police say Leyritz was drunk when he caused the fatal car crash in December 2007. In May, Leyritz checked himself into a psychiatric hospital. According to the New York Daily News, Leyritz said he was "overstressed" but not suicidal at the time.

Leyritz played for six teams in 11 seasons. During a stint with the New York Yankees, he hit a memorable home run in the 1996 World Series to help the Yankees win Game 4 against Atlanta.