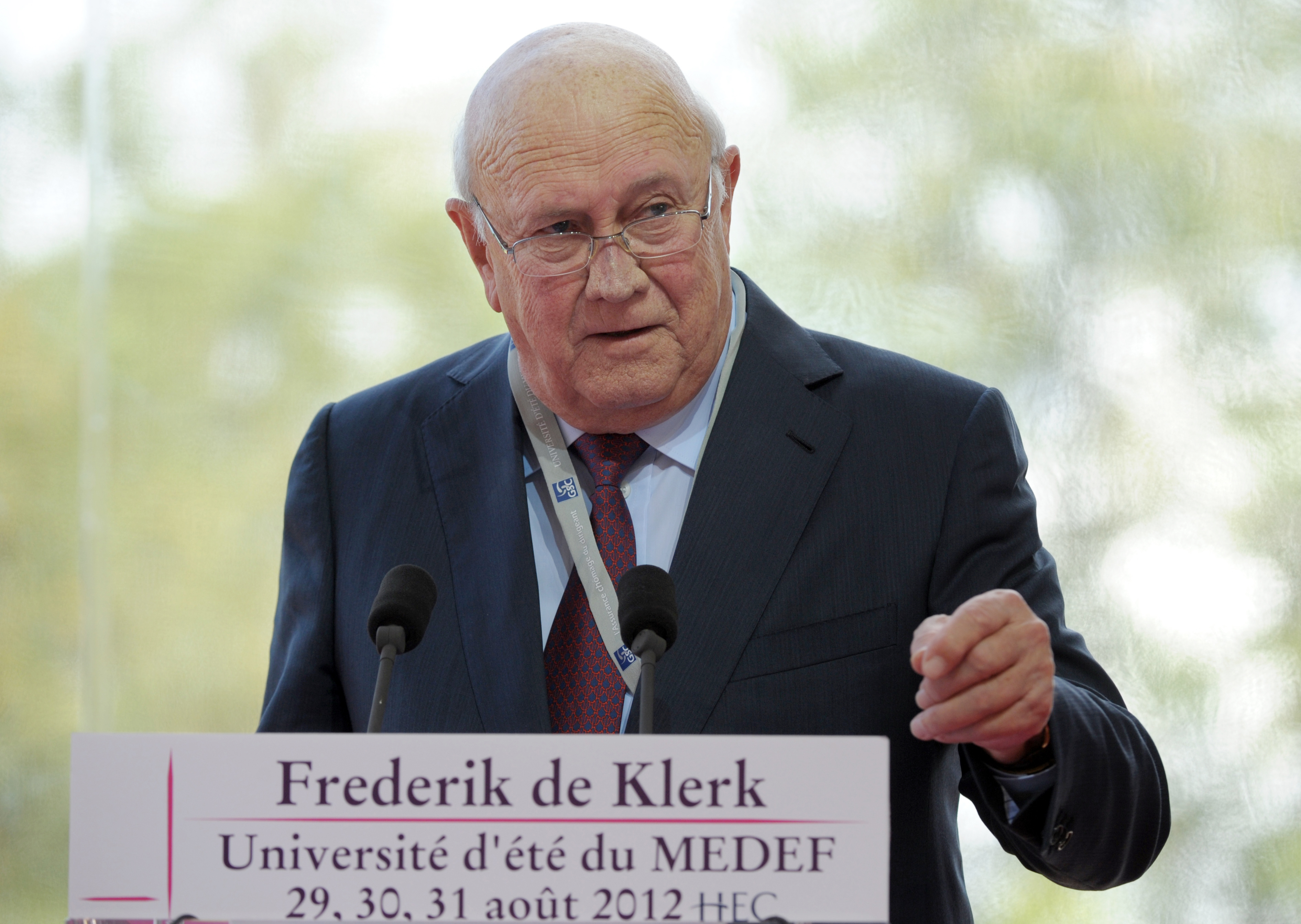 JOHANNESBURGF.W. de Klerk, the last leader of South Africa's apartheid era and a co-recipient of the 1993 Nobel Peace Prize with Nelson Mandela, has suffered dizziness and will be fitted with a pacemaker to help his heart function, a foundation said Tuesday.

A Cape Town-based foundation named after 77-year-old de Klerk said the former president felt dizzy after returning home on Sunday from a trip to Europe, and consulted his specialist on Monday.

"He has had several such spells in recent weeks and his specialist recommended the immediate installation of a pacemaker. He will be fitted with a pacemaker later today and will spend the night in hospital," the foundation said in a statement.

"We wish the former President well during this difficult time. Let us keep him and his family in our thoughts and prayers," Jacob Zuma said.

On Saturday, the foundation issued a statement on behalf of de Klerk and his wife Elita, saying they had decided to suspend a working visit and vacation in Europe because Mandela is critically ill, and that they were praying for an improvement in the health of the anti-apartheid leader.

Mandela, 94, was taken to a Pretoria hospital on June 8 to be treated for what the government said at the time was a recurring lung infection. Since then, there has been a groundswell of concern in South Africa and around the world for the man who spent 27 years as a prisoner under apartheid and then emerged to negotiate an end to white racist rule before becoming president in the country's first all-race elections in 1994.

De Klerk, a former education minister who had backed segregated schooling, was a key figure in a delicate transition that turned out to be relatively peaceful despite fears of widespread racial conflict. In 1990, a year after becoming South Africa's president, he announced he was legalizing the African National Congress, the banned group that led the anti-apartheid movement, and would free Mandela. He received the Nobel prize along with Mandela for his reformist initiatives and effectively negotiating himself out of power.

De Klerk later served as a deputy president during Mandela's single five-year term as president. Since his retirement from political life, he has traveled widely and delivered lectures. His foundation says its mission is to help poor and disabled children, contribute to conflict resolution and uphold South Africa's constitution, which robustly supports the protection of human rights.

Last year, Mandela's archivists and Google announced a project to digitally preserve a record of Mandela's life. In one online video, de Klerk recalled being asked to address parliament alongside Mandela in 2004. It was the 10th anniversary of the day Mandela became president. Mandela took de Klerk's arm as lawmakers applauded.

"It is, if you now look back, a symbol of how reconciliation can manifest itself," de Klerk said, reflecting on his encounter with Mandela.