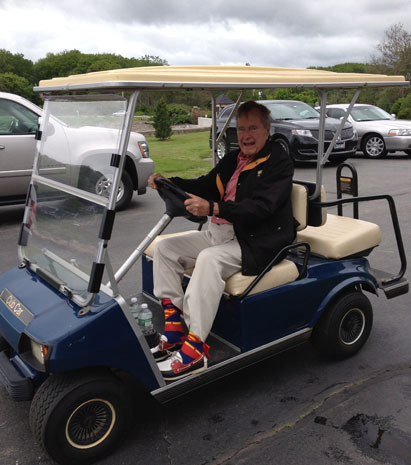 The library of Former President George H.W. Bush, who's celebrating his 89th birthday Wednesday, solicited pictures from well-wishers of their colorful socks to celebrate Bush's birthday.

"Join us in wishing President Bush a Happy Birthday by wearing your most colorful or outlandish socks," reads a message on The George Bush Library Foundation's website. "All are invited to submit a photo wearing crazy socks to share in the birthday festivities."

"George has taken to wearing the weirdest socks," his wife Barbara Bush humorously explained at "A Celebration of Reading" event in Houston in April. "The most colorful, the most wacky. They're better if they're terrible."

Bush joined Wednesday's sock soiree too, posting a picture on his Facebook page with a different patterned sock on each foot (under his presidential slippers) along with his great-granddaughter Mila's birthday booties (Mila's mother is George W. Bush's daughter, Jenna). Later Wednesday, his office emailed a photo of the former president donning Superman socks - a gift from a friend, according to his office - while driving a golf cart.

Bush, who spent seven weeks in the hospital in December and January, is spending his birthday at his home in Kennebunkport, Maine.