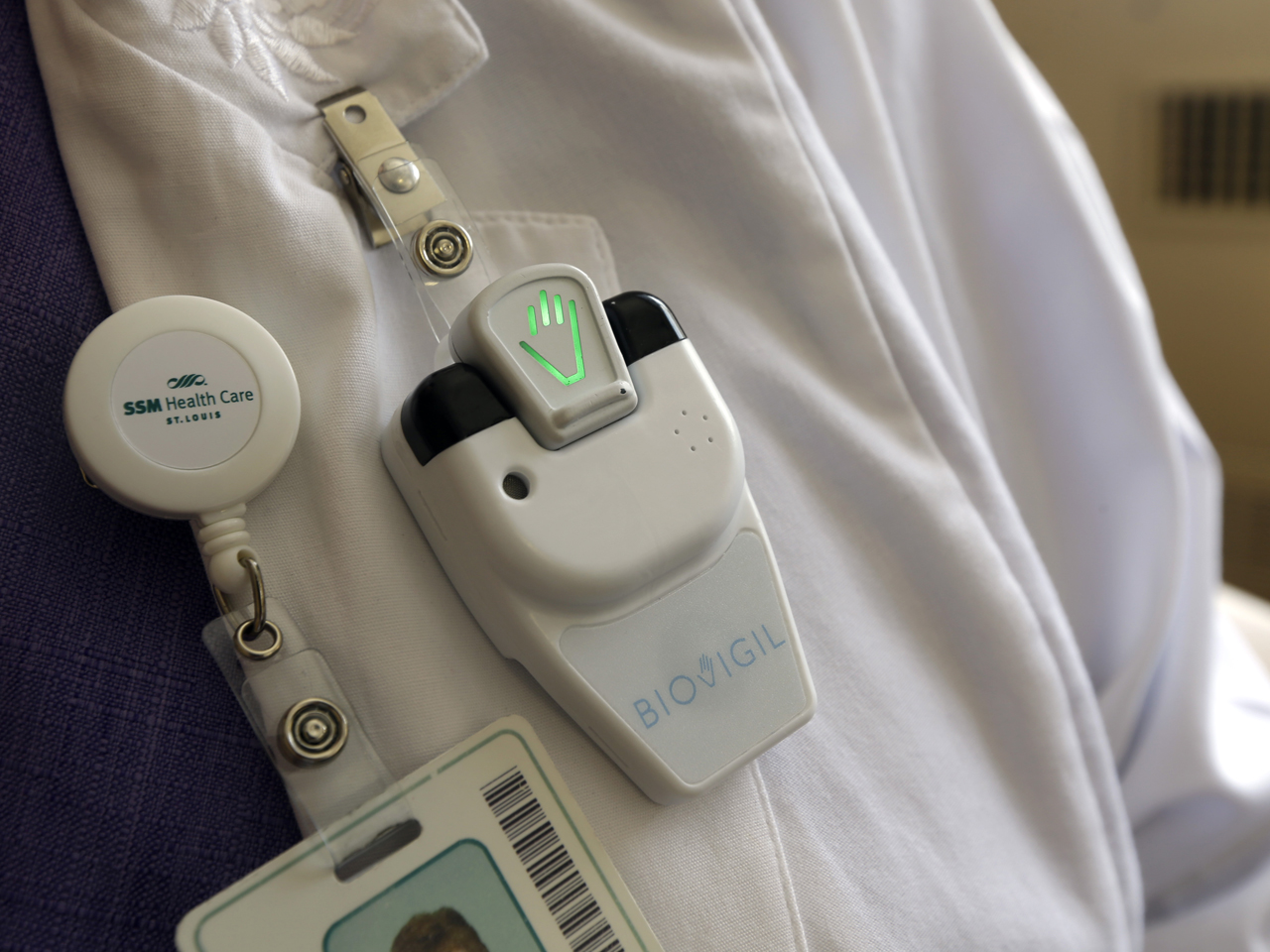 RICHMOND HEIGHTS, Mo. Forgetting to wash your hands can be a hazard to your health, but it can be especially dangerous for hospital employees who are around sick patients.

Hospitals have fretted for years over how to make sure doctors, nurses and staff keep their hands clean, but with only limited success. Now, some are turning to technology - beepers, buzzers, lights and tracking systems that remind workers to sanitize, and chart those who don't.

Health experts say poor hand cleanliness is a factor in hospital-borne infections that kill tens of thousands of Americans each year. The U.S. Centers for Disease Control and Prevention in Atlanta estimates that one of every 20 patients in U.S. hospitals gets a hospital-acquired infection each year.

"We've known for over 150 years that good hand hygiene prevents patients from getting infections," said Dr. John Jernigan, an epidemiologist for the CDC. "However, it's been a very chronic and difficult problem to get adherence levels up as high as we'd like them to be."

About 1.7 million health care-related infections occur each year nationwide, and 99,000 of these are fatal, according to Consumer Reports.

A study published in June in the Journal of Environmental Health showed that 95 percent of people are washing their hands incorrectly. To properly wash your hands, wet your hands with clean, running water (warm or cold) and apply soap. Make sure to scrub your fingertips, between your fingers and the back of your hands for at least 20 seconds. If you're unsure how long that is, the Centers for Disease Control and Prevention suggest singing "Happy Birthday" twice.

If soap and water aren't available, you can use a at least 60 percent alcohol-based sanitizer. Rub it all over your hands until the substance is dry.

Hospitals have tried varying ways to promote better hygiene. Signs are posted in restrooms. Some even employ monitors who keep tabs and single out offenders.

Still, experts believe hospital workers wash up, at best, about 50 percent of the time. One St. Louis-area hospital believes it can approach 100 percent adherence.

Since last year, SSM St. Mary's Health Center in the St. Louis suburb of Richmond Heights, Mo., has been the test site for a system developed by Biovigil Inc., of Ann Arbor, Mich. A flashing light on a badge turns green when hands are clean, red if they're not. It also tracks each hand-cleaning opportunity - the successes and the failures.

The failures have been few at the two units of St. Mary's where the system is being tested, the hospital said. One unit had 97 percent hand hygiene success, said Dr. Morey Gardner, the hospital's director of infection disease and prevention. The other had 99 percent success.

"The holy grail of infection prevention is in our grasp," Gardner said.

The Biovigil system is among many being tried at hospitals. A method developed by Arrowsight, based in Mt. Kisco, N.Y., uses video monitoring. It is being used in intensive care units at North Shore University Hospital in Manhasset, N.Y., and the University of California San Francisco Medical Center.

Akron, Ohio-based GOJO Industries, maker of Purell hand sanitizer, has developed an electronic compliance monitoring system using wireless technology to track when soap and hand sanitizer dispensers are used. The SmartLink system gives the hospital data on high- and low-compliance areas. The company said it has installed the system at several hospitals around the country, but didn't say how many.

One is similar to Biovigil's green badge method. In HyGreen's, a wall-mounted hand wash sensor detects alcohol on the hands. The badge includes an active reminding system. Unclean hands create a warning buzz. If the buzz sounds three times, the worker is noted for noncompliance.

HyGreen spokeswoman Elena Fraser said that because some hospitals are moving away from alcohol-based sanitizers, HyGreen offers a second system. A touch of the sanitizer dispenser clears the worker to interact with a patient. If the worker shows up at the patient bed without hand-cleaning, the series of warning buzzes begins.

Fraser said hospital infections have dropped 66 percent at units of Miami Children's Hospital where the badge system has been implemented.

Nurses using the Biovigil system at St. Mary's near St. Louis wear a badge with changeable colored lights. A doorway sensor identifies when the nurse enters a patient's room, and the badge color changes to yellow.

The nurse washes his or her hands and places them close to the badge. A sensor in the badge detects chemical vapors from the alcohol-based solution. If hands are clean, the badge illuminates a bright green hand symbol.

If the nurse fails to sanitize, the badge stays yellow and chirps every 10 seconds for 40 seconds, then flashes red. Once the flashing red starts, the nurse has another 30 seconds to wash up, otherwise the badge turns solid red, denoting non-compliance. Either way, each instance is tracked by a computer. The hospital can track each individual's compliance.

Registered Nurse Theresa Gratton has helped lead the effort toward hand cleanliness at St. Mary's. She heard about the Biovigil system in early 2012 and convinced the hospital to give it a try.

Gratton said patients are aware of the risk of infection and frequently inquire about whether caregivers have washed their hands. She said the badge relieves their anxiety.

Bill Rogers, a 65-year-old retiree recuperating at St. Mary's from back surgery and a heart scare, agreed.

"The first thing I noticed up here was the badges," Rogers said. "It is comforting for me to know their hands are clean as soon as the badge beeps and it goes from yellow to green."

St. Mary's is expanding the Biovigil system later this year to other units of the hospital and to employees other than nurses, though details are still being worked out, Gardner said. Eventually, the system may be expanded to SSM's seven other St. Louis-area hospitals, he said.

Biovigil's chief client officer, Brent Nibarger, said customers won't buy the system but will pay a subscription fee of about $12 a month per badge.

The CDC's Jernigan said the high-tech systems can only help.

"For a health care worker, keeping their hands clean is the single most important thing they can do to protect their patients," Jernigan said.