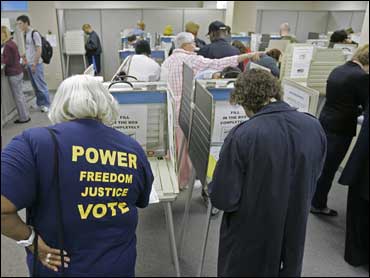 Voters in this crucial swing state began casting absentee ballots Tuesday, after state and federal courts upheld a ruling that allows residents to register and vote absentee on the same day during the first six days of voting.

Five people were waiting at the Cuyahoga County Board of Elections when doors opened at 8:30 a.m., and about 230 had voted by midday in the state's most populous county.

"I wanted to avoid the traffic and the people," Glass said about the chance to vote early. She registered to vote in the presidential election four years ago in Columbus, but left the polling place without casting a ballot after waiting in line for several hours, she said.

Election officials around Ohio prepared for a rush of early voting Tuesday, the first day absentee ballots are accepted in advance of the Nov. 4 presidential election.

Backed by the state Supreme Court and two federal judges, Secretary of State Jennifer Brunner, a Democrat, is allowing new voters to register and cast an absentee ballot on the same day from Tuesday through Oct. 6.

In Columbus, CBS Affiliate WBNS reports that young voters camped out in tents overnight at Veterans Memorial waiting for the polling place to open at 8:00 a.m.

"Ohio is one of the most important states in the election, Rachel Coyle told WBNS, "and students are going to be the make-or-break of this election.

"It's so close, and it's going to be close right up to the election, so we're trying to show people that this constituency is going to go out and vote this year," Coyle said.

Michael Stinziano of the Franklin County Board of Elections said a big turnout is expected this year, with between 10,000-12,000 people anticipated to come out for early in-person voting.

For weeks, the Ohio Republican Party accused Brunner of interpreting the early voting law to benefit her own party by allowing same-day registering and voting. Republicans argued that Ohio law requires voters to be registered for 30 days before they cast an absentee ballot.

On Tuesday, the Ohio Republican Party asked the 6th U.S. Circuit Court of Appeals in Cincinnati to either stop same-day voting or at least require Brunner to separate those ballots so they can be verified.

Brunner dismissed the GOP's concerns, saying counties are required to place ballots in special envelopes that have the voter's name on it. Registration information will be verified before those ballots are counted on Nov. 4, she said.

"It's a great theory but from a practical standpoint there are great concerns that it will actually work," said Bill Todd, a lawyer for the GOP.

The second voter in line at the Board of Elections here was Julia Kramer, 19, a Case Western Reserve University freshman from New York City and an Obama volunteer. She said she's been working on campus to register out-of-state students to change their registrations to Ohio because of its critical role in the election.

Nevertheless, "A lot of people are really attached to their hometowns," Kramer said. "It's hard to explain to people that your vote (in New York) won't count as much."

In Columbus, voters wanting to cast ballots as soon as possible on Tuesday morning had set up tents Monday night to wait in line outside the Franklin County Board of Elections.

Obama's campaign organized car pools from college campuses to early voting sites. The Northeast Ohio Coalition for the Homeless was ferrying voters from homeless shelters to polling sites in the Cleveland area. Other organizations that seek to increase poor and minority participation in elections are transporting voters from low-income neighborhoods.

The targeted voters have all traditionally had a harder time getting registered, and then getting to polling places on Election Day.

Republicans weren't ceding the early voting crowd just because they were engaged in a court challenge.

"You have a special opportunity to help elect John McCain, Sarah Palin and Republicans across the ballot," a page on the Republican National Committee's Web site said.

The window occurs because state law requires absentee voting to begin 35 days before Election Day, on Sept. 30, while the end of registration for this election is Oct. 6. The window was used by voters sparingly in previous elections, but never got any attention until the Republican-controlled Legislature passed a law in 2005 that enabled all Ohio voters to vote absentee.