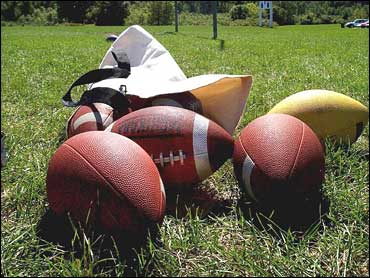 The players took the capsules the morning of practices, allowing doctors to monitor core body temperatures throughout the workouts, said Douglas Casa, director of UConn's Athletic Education Program and an assistant professor of kinesiology who headed the study.

Each capsule - the size of a large vitamin - contains a quartz crystal that vibrates according to body temperature. It emits a low frequency radio wave that a hand-held recorder can read. The doctors hold the device to the player's body, locate the capsule and take the measurement.

The NCAA funded the study, which ended Wednesday, to see how new practice rules have affected college football players. Results were being compiled, and no preliminary findings were released.

The new rules, which ease athletes into the practice schedule, were implemented after the deaths of Minnesota Vikings lineman Korey Stringer and Northwestern University safety Rashidi Wheeler in 2001.

The rules took effect this year and include a five-day break-in period before athletes can begin rigorous twice-a-day practices, said David Klossner, assistant director of Education Reach at the NCAA.

"This will help players get used to the rigors of heavy equipment and the heat of practice," said Klossner.

Helmets are the only equipment players can wear during the first two days of summer practice. By the fifth day, they can wear full padding. After five days, coaches can begin to hold two practices per day, but only every other day.

Before the changes implemented this year, coaches had no limitations.

"Coaches could basically do whatever they wanted," said Klossner. "They could hold as many practices as they thought necessary."

Measuring a player's core body temperature is crucial, and doctors say they cannot get an accurate reading using a mouth or ear thermometer. If the body heats up too much, a player may experience either heat exhaustion or heatstroke, said Lawrence Armstrong, a professor of environmental and exercise physiology at UConn.

A player is considered to have heat stroke when his core temperature is more than 103 degrees. Doctors said no UConn athletes experienced such symptoms during the study.

"Any player with that high of a temperature requires medical attention," said Armstrong.

The Huskies have been practicing in hot and humid weather the past several days. The high temperature in Hartford Wednesday was 90 degrees.

UConn quarterback Dan Orlovsky, who participated in the study, was more than willing to take one for the team.

"I figured why not, if it's going to help us along with other college players," said Orlovsky. "You can't get anything negative out of this, only positives."

Guard Brian Markowski said that the study was weird at first, but thought nothing of it by the end of the eight days.

"It is important to get some information to see if rules will be beneficial," said Godek.