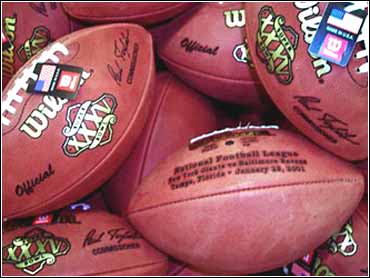 A middle manager with AT&T was arrested for running an office football pool in which he took a 10 percent cut of the action equal to nearly $3,000, authorities said.

Wayne Davis, 34, of New York City was charged with promoting gambling and could get up to five years in prison, though prosecutors said he is unlikely to do any jail time.

"Look, I do not consider Wayne Davis to be Public Enemy No. 1," prosecutor Ron Kercado said. "Nonetheless, he is in violation of the statute."

Kercado said Davis ran afoul of the law when he took a 10 percent cut.

Davis' lawyer, John Murphy, said bettors were told the 10 percent was meant to pay for a party for the group. "He's nothing other than a guy in the office who was asked to draw the grid for a football pool," Murphy said.

New Jersey prosecutors regularly uncover illegal sports betting "wire rooms," and many have been linked to mobsters. But Kercado, a 27-year veteran, said Davis' case is the only one he can recall involving an office pool.

The Super Bowl pool was advertised in office e-mails, and a co-worker turned Davis in, authorities said.

Authorities said Davis had collected close to $30,000 in bets of $300 each. Davis' lawyer, however, said he had collected only a few bets, each costing $150. He said Davis canceled the pool when not enough people showed interest, and was returning the money when he was arrested.

Davis was back at work Thursday, AT&T spokesman Jeff Roberts said. He declined to say if the company has a policy regarding office pools.