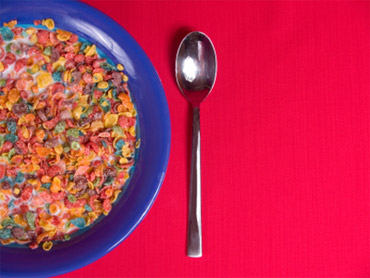 (CBS) Food dyes may make food look tastier, but a prominent watchdog group says they pose major health risks and is calling for the government to ban them.

The Center for Science in the Public Interest (CSPI) says the dyes - used in a commercially prepared foods ranging from candy to breakfast cereals and salad dressing - present a "rainbow of risks" and can cause allergic reactions, hyperactivity, and even cancer.

"These synthetic chemicals do absolutely nothing to improve the nutritional quality or safety of foods, but trigger behavior problems in children and, possibly, cancer in anybody," Michael F. Jacobson, executive director of the nonprofit group, said in a written statement. "The Food and Drug Administration should ban dyes, which would force industry to color foods with real food ingredients, not toxic petrochemicals."

Jacobson is co-author of a new report entitled "Food Dyes: A Rainbow of Risks."

The group says the three most widely used dyes - Red 40, Yellow 5, and Yellow 6 - are contaminated with cancer-causing substances. Another dye, Red 3, has been identified as a carcinogen by the FDA but is still in commercial use.

Other dyes have been linked to allergic reactions, the group says, and studies show that dyes can cause hyperacitivity in children.

Despite those concerns, manufacturers put about 15 million pounds of eight synthetic dyes into our foods each year, according to the group. Per capita consumption of dyes has risen five-fold since 1955, thanks in part to the proliferation of brightly colored cereals, fruit drinks, and candies pitched to children.

The continued use of food dyes presents "unnecessary risks to humans, especially young children," James Huff, associate director for chemical carcinogenesis at the National Institute of Environmental Health Sciences' National Toxicology Program, said in a statement. "It's disappointing that the FDA has not addressed the toxic threat posed by food dyes."

Other governments have already taken action against food dyes, according to the group. The British government asked companies to phase out most dyes by last December 31, and the European Union will require a warning notice on most dyed foods starting on July 20.

The group predicted that the label notice might be the "death knell" for dyes across Europe.

If the CSPI has its way, the dyes will die here too.