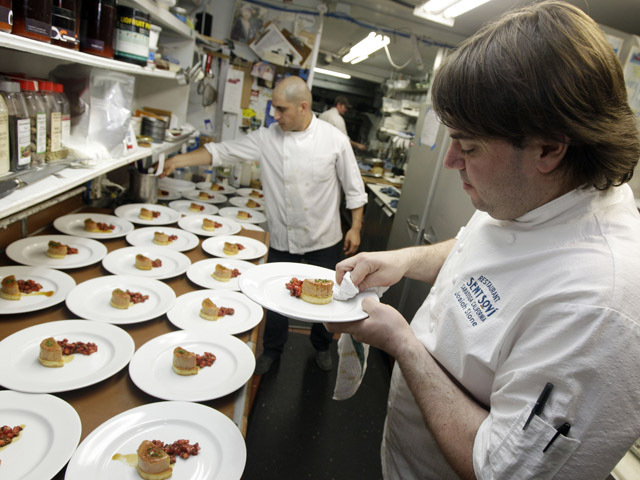 (AP) This is not a good time to be a duck with a fatty liver in California, though better times lie just ahead.

Chefs are loading their high-end menus with duck liver: terrine de foie gras, seared foie gras with mango chutney, foie gras salad and sweet foie gras for dessert. And they are keeping secret the locations of their multi-course dinners to avoid protesters as a July 1 ban looms in California, the only state to outlaw foie gras.

Demand for the delicacy created by force-feeding ducks through funnel-like tubes has never been higher as diners sate their palates with a product that soon will be banned for production and sale in the Golden State.

"The price has doubled. People are finding it hard to get it because the demand is so high," said Tracy Lee of the San Jose-based traveling dining service Dishcrawl, which has organized a series of 15 secret, sold-out foie gras dinners. Her last one is Thursday.

While gourmands stockpile foie gras at $60 a pound, others are stomaching the frenetic food fest with disdain.

"High-end foodies and chefs stuffing down their throats excessive amounts of fatty liver from force-fed ducks in the run-up to the ban paint a pretty ironic picture," said Jennifer Fearing of the Humane Society of the United States.

As the California foie gras feeding frenzy escalates, protesters in San Francisco and Los Angeles are staking out restaurants and even making reservations to tie up seats at dinners they know they'll never attend.

"Many people don't know what foie gras is or how it's produced and they're horrified when we tell them," said Dana Portnoy, who shot undercover video inside a foie gras operation and organizes the San Francisco-area protests. "Occasionally we'll run into antagonistic patrons, but that's usually when we're protesting at the foie gras benefit dinners."

It's why Lee doesn't publicize the restaurants where her dinners will be held until a day before the date.

"So far we haven't had any protesters, which has been nice," she said.

The California legislature gave the state's only producer, Sonoma Artisan Foie Gras, more than seven years to come up with a cruelty-free way to fatten the duck's liver when in 2004 it voted in the ban on producing and selling foie gras. Absent that, a coalition of chefs have mounted a lobbying campaign to try to overturn the law in the future, and the foie gras dinners are funding that ongoing effort.

To the oohs and aaahs of about 30 diners, Chef Josiah Slone hosted a recent seven-course foie gras feast at his Sent Sovi restaurant in Saratoga. He started with arugula with foie gras vinaigrette, moved to foie gras mousse with tartufata and English peas and seared foie gras with savory rhubarb pie. For dessert: foie, peanut butter and chocolate.

"For me, it was more of an educational dinner to talk a little about how foie gras is produced and the science behind how it's produced," Slone said. "Yes there are two sides to it, but understanding the line between science and emotion is very important for people."

There are enough "quality ingredients out there" that his California-French menu won't be lacking when it's gone, Slone said. As someone who goes to extreme measures to source quality meat and vegetables, he thinks animal welfare advocates could end more suffering if they'd focus on practices at large confined animal farming operations producing beef, chicken and pork.

"I think the issue that the animal rights people have is a lot bigger than foie gras," Slone said. "Foie gras was sort of an easy target, sort of low-hanging fruit. But in the sense of improving conditions of animal welfare, ending some of the factory farming practices that big ag is defending is a very admirable goal."

The California ban, which maintains that over-feeding ducks using a pipe stuffed down the esophagus is cruel, comes as four animal welfare groups filed a lawsuit against the U.S. Department of Agriculture last month, making another point about foie gras. They hope to secure a national prohibition by arguing that USDA is violating the Poultry Products Inspection Act by allowing "diseased birds" to enter the food chain.

Foie gras — French for "fatty liver" — is made from liver swollen to 10 times its normal size, which the lawsuit argues is acute hepatic lipidosis, a condition linked to obesity in animals. Ducks' livers become so engorged by the feeding process called "gavage" that the birds can't walk and have trouble breathing.

Gavage has been outlawed in a dozen countries including Israel, the Czech Republic, Denmark, Finland, Switzerland and the United Kingdom.