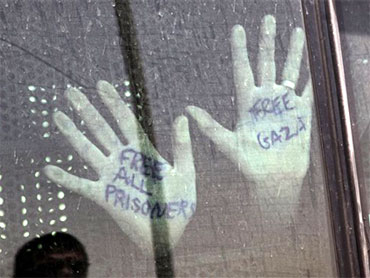 At 4:30 a.m. from her perch on the bridge of a passenger ship in the Mediterranean Sea, Hanin Zoabi saw the first lights of fast-approaching Israeli gunships and helicopters. Norman Paech awoke to the sound of explosions.

Minutes later, an Israeli commando, sent to take over the ship in what was expected to be a quick and easy operation, found himself lying on a lower deck, beaten and pulling a knife out of his stomach.

A storm of YouTube videos, grainy army footage and interviews is beginning to provide a clearer picture of the clash at sea that left nine pro-Palestinian activists dead.

The accounts of Monday's events were sometimes conflicting and there was no way to independently confirm what happened.

Still, details emerging from the footage and interviews with Israeli commandos, defense officials and activists help explain how a voyage billed as an act of peaceful protest ended with a pre-dawn gunbattle - and a wave of international criticism aimed at Israel.

Israel's decision to stop the protest boats by sending troops to commandeer them seems to have been based on the assumption - based on past experience and the activists' own statements - that none of the passengers would fight.

The situation spiraled out of control when dozens of activists converged on the top deck and attacked the soldiers, clubbing them down as the troops rappelled from a helicopter onto the ship one by one.

On Sunday, six boats making up the protest flotilla began sailing from waters off Cyprus toward the sealed off Palestinian territory.

Free Gaza, a group made up mostly of Americans and Europeans, had sent ships before to try to bring attention to the 3-year-old Gaza blockade and the hardships of the territory's 1.5 million residents. Israel and Egypt imposed the blockade after the Islamic militant Hamas, which most Western countries consider a terrorist organization, seized power and stepped up rocket fire into Israel.

Israel allowed some earlier ships to reach Gaza and stopped others, boarding a boat in at least one case. But the activists practiced only passive resistance and there was never any bloodshed. Ahead of this week's mission, organizers again announced they would not offer violent resistance if confronted by Israeli forces.

But things were different this time. The largest flotilla by far, it was dominated not by Free Gaza, which sent only one small passenger boat, but by three ships sent by an Islamic aid group from Turkey, the Foundation for Human Rights and Freedom and Humanitarian Relief. The group, known by its Turkish acronym IHH, was banned by Israel in 2008 because of alleged ties to Hamas.

Around 600 of the flotilla's 700 passengers were aboard the Mavi Marmara. Most were from Turkey and Arab countries, but the group also included dozens of Americans and Europeans, including lawmakers and an Arab member of Israel's own parliament.

At the end of May, with the flotilla preparing to sail, Israel announced the boats would not be allowed to reach Gaza. The government offered to transfer any humanitarian aid to the Palestinian territory, but the flotilla's organizers refused, saying their goal was to break a blockade they considered illegal.

Israel's top military brass met to discuss how to stop the boats, according to Israeli defense officials. They considered sabotaging the vessels but rejected that idea and decided to send troops to board them and escort them to an Israeli port.

Previous operations had gone off largely without incident - even on two boats smuggling weapons - and officials believed there was little risk. In what was probably meant as a deterrent, the army tipped its hand by declaring that commandos would be involved.

Israel built a makeshift detention center in a southern port to process the activists. Israeli Foreign Minister Avigdor Lieberman called the flotilla a "provocation" and warned it would be stopped "at any cost."

Among the passengers was a baby, the 1-year-old son of Turkish activist Nilufer Cetin. "We were aware of the possible danger," she said. "But there are thousands of babies in Gaza. If we reached Gaza, we would have played with them and taken them food."

On May 26-27, teams of commandos from the navy's elite and secretive Flotilla 13 unit began rehearsing for the operation off Israel's coast, according to Israeli defense officials.

That night, at 10:30 p.m., the Mavi Marmara received a radio transmission from an Israeli warship. Zoabi, an Israeli Arab lawmaker, was on the bridge. The Israeli sailors asked the captain for the ship's destination, she said, and the captain answered that he was headed for Gaza.

The Israelis ordered the flotilla to halt, but the ships pressed ahead. About 80 miles away, in the besieged Palestinian territory, the Hamas government had prepared a festive welcome, decking out the territory's ruined port with red Turkish flags.

By 1:30 a.m., Zoabi could make out lights on the horizon and identified eight ships. The Israelis trailed the flotilla for three more hours, keeping their distance, she said.

At 4:30 a.m., with the boats still in international waters, the Israeli commanders gave the order for the operation to begin, and Zoabi saw speedboats and helicopters moving swiftly toward the Marmara.

Five of the flotilla's six boats were swiftly commandeered by the Israelis.

On the Free Mediterranean, carrying mainly Greek and Swedish activists and a load of wheelchairs, building materials and medicine, Aris Papadokostopolous said he saw commandos come aboard.

"Some people were hit by clubs and electric shocks," he said, but no one was seriously hurt.

On the freighter Gazze 1, masked soldiers ordered everyone into one room and kept them there for nine hours, according to Turkish activist Mustafa Sancaktutan. There, too, no one was seriously hurt.

Aboard the Mavi Marmara, passengers were deafened by the roar of an Israeli Black Hawk helicopter. A rope dropped down, and the first of three 15-man teams began to descend.

According to commandos interviewed by The Associated Press, the troops were expecting little resistance and had exchanged their usual assault rifles for paintball guns.

"It was a civilian paintball gun that any 12-year-old can play with," one soldier said, speaking on condition of anonymity under military regulations. The soldiers said they had loaded pistols to use only in the event of an emergency.

Zoabi said she heard gunfire over the ship and saw blue flares. Other passengers also said the soldiers fired on the boat before boarding. Israel denies this. None of the passengers interviewed by AP have said lethal force was used by the Israelis before they boarded the ship.

Paech, a retired law professor from Hamburg, Germany, awoke to the sound of explosions. He went outside and saw soldiers. "They were wearing camouflage, had their faces masked, had night vision gear on their helmets and carried lots of weapons," he said.

Like Zoabi and Paech, most passengers had no intention of confronting the troops and were not on the top deck when the first soldiers rappelled down.

But a video released by the military showed a group of several dozen men waiting for the Israelis.

The edited footage showed soldiers descending from the Black Hawk into a crowd of men with sticks and clubs. Three or four activists overpowered each soldier as he landed, beating each one to the deck, where they were surrounded by more men with sticks. One soldier was tossed over the side onto a lower deck.

"When I landed on the other deck I felt that someone had stabbed me in the stomach. I pulled the knife out of my stomach," the soldier, identified only as Captain R., told Israeli Channel 10 TV from his hospital bed. One commando said several of his comrades jumped into the water to save themselves.

Paech could not see what was happening on the top deck.

"I don't deny that in the fighting some of them were using some of the weapons they've been showing on TV now, like the slingshot or the hatchets," he said. "But don't forget that the Israelis attacked us in international waters. According to international law, you're allowed to defend yourself when you get attacked."

With men down and believing their lives were in danger, the Israeli commandos say they requested permission to use live fire. This was granted about 4:50 a.m., 20 minutes after the operation began. The Israelis pulled out their pistols and began to shoot.

In the ensuing melee, two activists succeeded in wresting two pistols away from the troops and shot two soldiers, according to the Israeli military and hospital officials. Israel says both activists were shot dead.

But those on the ship had no chance against armed and highly trained troops, and by 5 a.m., the ship was under the commandos' control.

Nine activists were dead, most of them Turks, according to the Israeli military. Dozens were wounded, along with seven soldiers. Paech said casualties were brought into a makeshift field hospital on one of the lower decks; footage from the activists showed passengers in orange life jackets treating the wounded.

Israeli officers later displayed slingshots, knives and truncheons they said were found on the ship as evidence of organized resistance. Defense officials also say some activists had military-style gear such as bulletproof vests and night-vision goggles and carried large sums of cash.

From the activists' side, no one who was on the top deck at the time of the assault had come forward by Wednesday, possibly because the people involved are either dead, wounded or in Israeli custody.

Zoabi and others on board do not deny there was resistance but say it was not organized.

"The ... helicopters, the ships and gunfire created the atmosphere that people wanted to defend themselves," Zoabi said.

Inge Hoeger, a member of the German Left Party, said that after securing the ship soldiers searched the passengers, took their personal belongings and handcuffed them. "They were obviously looking for weapons. They raided and slashed all the suitcases of all passengers and everything was all over the place," she said.

Within an hour, Israeli air force helicopters were evacuating the wounded soldiers and passengers. Several hours later, Turkey had recalled its ambassador to Israel, Greece had canceled a joint military exercise and nearly every country in Europe had weighed in with a condemnation of Israel.

Paech was sent in a police car to Israel's international airport and put on a plane to Berlin.

"They did not give back any of our luggage or personal belongings. I arrived with only my T-shirt and my pants," he said.