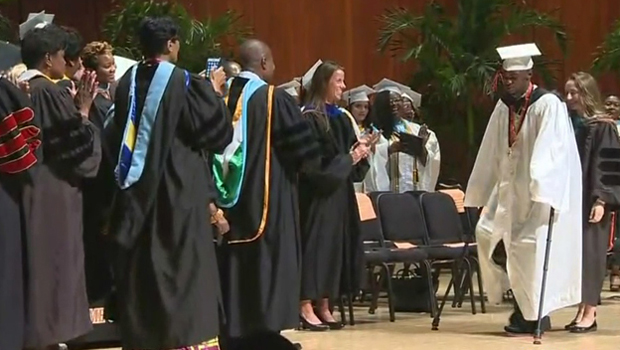 MIAMI -- A teen who was left paralyzed after he was shot surprised everyone at a high school graduation ceremony Wednesday, CBS Miami station WFOR-TV reports.

"I'm really happy and really, really blessed to be here because I could have died back in 2012," Aaron Willis told the station. "And I could have died some other times after that, but I'm still here, and I graduated."

He was just 15 when he was paralyzed from the waist down after being shot in the back as he hurried home on his bicycle. It was a case of mistaken identity.

Even then, this student and athlete with a wall full of football trophies was not bitter but thankful for those who loved him.

An upbeat Willis returned to school nine months later in a wheelchair.

A year after he was shot, Willis began to walk with braces from waist to foot and a walker - a remarkable stride, he says.

But on his graduation day, Willis intended to really walk across the stage and receive his high school diploma.

Willis' dad and mom, who cried so many tears of heartache, cried a different sort of tear on graduation day.

"They are tears of joy and tears of knowing that there is a God somewhere," said Willis' father, Sammie Willis.

Finally the moment arrived, and his name was called.

Using special robotic legs he received from the Miami Project to Cure Paralysis and after lots of practice, Willis walked onstage.

A young man who could have been a quitter after a twist of inner-city violent fate was selfless as he walked to receive the diploma he worked so hard to earn.

Willis was accepted to Florida International University just a day before his graduation, which he will attend on scholarship.

Boy with autism who wished for friends goes viral
More