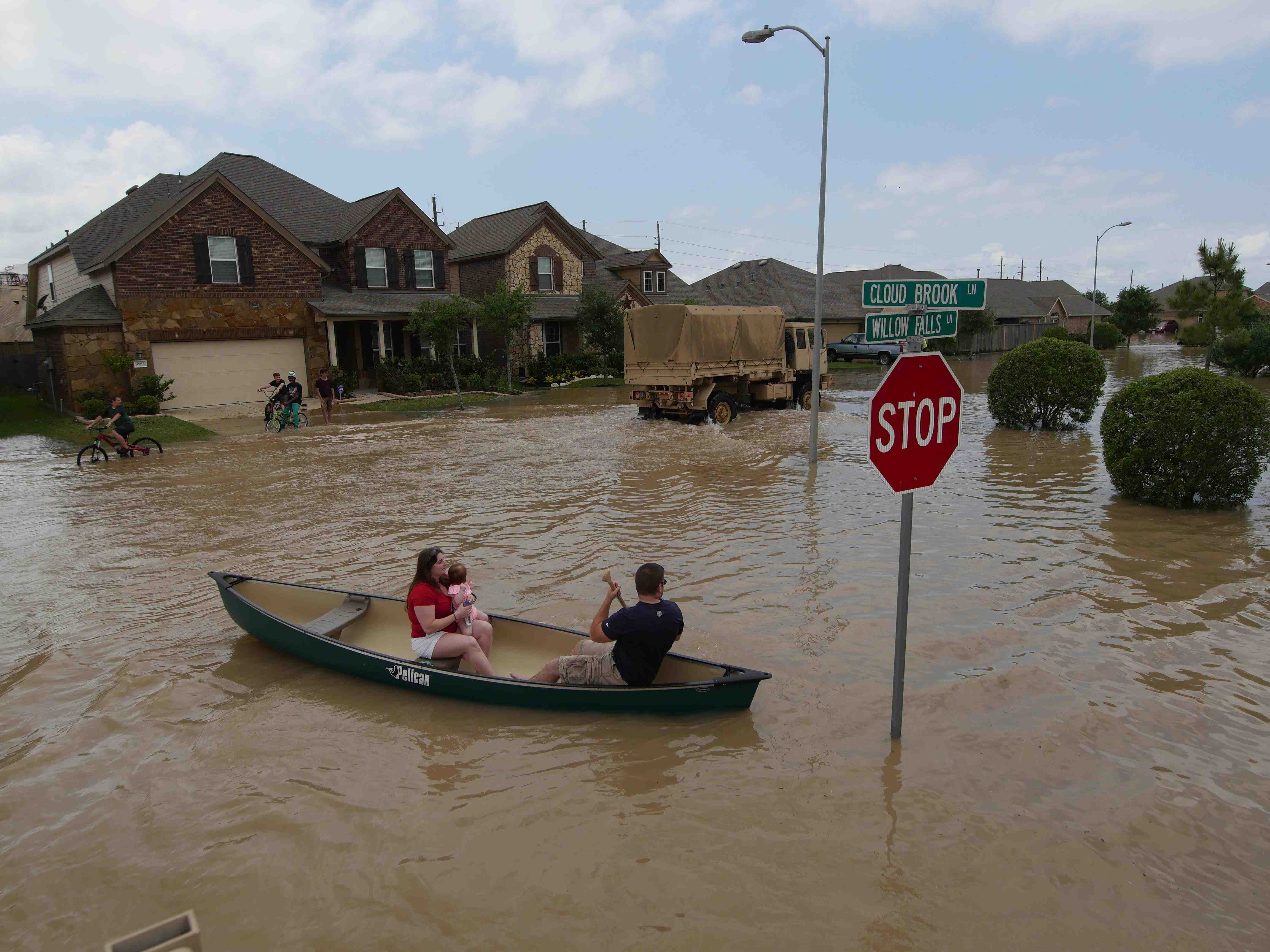 HOUSTON -- Thunderstorms in the Houston area Thursday have worsened flooding in areas of the city that had been drenched earlier in the week.

Houston and surrounding counties have received more than a foot of rain since Sunday night. The flooding has forced thousands of people from their homes. It's been linked to eight deaths.

A heavy rainstorm Thursday morning dumped more than an inch of rain in less than an hour in some areas of Harris County, which includes most of Houston.

An official with the Harris County Flood Control District says it's not enough to cause more widespread flooding.

Officials in Wharton, a community of about 8,700 residents about 50 miles southwest of Houston, ordered residents to leave their homes in some low-lying neighborhoods along the rain-swollen Colorado River.

The official with Harris County says two aging reservoirs in west Houston that are considered "extremely high risk" by the U.S. Army Corps of Engineers are holding record amounts of water -- at 50 percent capacity -- but they remain in good shape.

The dams are classified as high risk only because they're about two decades beyond their life expectancy and in a populated area, said agency spokeswoman Sandra Arnold.

However, a Corp report issued on the dams in 2012 offered more worrying criteria for the classification, noting that such structures are "critically near failure or at extremely high risk under normal operations."

In the unlikely event that the dams collapsed, downtown and the highly populated area in sprawling West Houston would likely see deaths as well as $60 billion in property damage, said Richard Long, a project operations managers with the Corp.

But the current conditions are no reason to panic, he added. While the dams still have these critical classifications, improvements done the last few years have shored up the seven-decade-old structures and an ongoing $72 million construction project will greatly strengthen them.

"The dams are in good condition," he said. "We have 24-hour surveillance occurring.... Integrity wise, we're in real good shape."

The monitoring of the dams comes as the Houston-area deals with the effects of heavy rain that walloped the area Sunday night and Monday. Creeks and streams getting runoff from the rain have continued to rise above their banks, prompting neighborhood flooding and additional evacuations.

While the dams are not expected to reach 100 percent capacity, part of the reservoirs are located on public property, meaning that additional water that continues to come into the reservoirs from rivers and streams is expected to flow into surrounding public roadways and some subdivisions, possibly flooding a number of homes, Long said.

Harris County Judge Ed Emmett said officials are considering acquiring sandbags for deployment on "non-governmental land" behind the Addicks and Barker reservoirs due to the potential flooding of homes in the area.

But he said the damage should be limited.

"I know people's nerves are on edge," he said. "There should be very few homes."

The Corps of Engineers' recent improvements on the dams include additional filters to control seepage, additional lighting and emergency power "to have around the clock ability to operate the dams and to ensure their inspections and function when we get pools like we're having right now," Long said.

"From this one flood event... the operations of (the dams)... have prevented over $3 billion in damage downstream of these projects," he said.

Despite reassurances by the Army Corps of Engineers on the integrity of the dams, there still remains a worry the structures might fail in some manner, said Jim Blackburn, a Houston environmental attorney who in 2011 filed a lawsuit on behalf of the Sierra Club related to reducing runoff into the two reservoirs.

"If we lose Addicks and Barker, that will be absolutely catastrophic," he said. "And we should be doing as a community everything we can to protect them. They are the best flood control investments we have in this community."

An eighth death was confirmed Wednesday from the flooding, CBS affiliate KHOU reported. Six of the deaths were in Harris County, one in Waller County, and one in Austin County. Almost all those who died were in vehicles, authorities said.

On Wednesday, authorities said four boys were rescued from a nearly submerged boat after a dangerous 11-mile ride along a flooded creek north of Houston.

The Montgomery County Constable's Office says the juveniles were rescued Tuesday night after being reported missing on Caney Creek, near New Caney.

A group of people in an airboat found the boys under the Highway 59 bridge near FM 1485 without life jackets and in a boat with no motor just before 8:30 p.m., CBS affiliate KHOU reported.

Sgt. Jim Slack said Wednesday that the boys were "scared but safe" after being rescued.

Authorities believe the juveniles found a boat and decided to go for a ride even though the boat didn't have life jackets, a working motor or paddles on board.

Slack says the boys went into the water with the boat about 90 minutes before sunset. They were located and rescued several hours later as the nearly submerged boat passed under a highway bridge.

The boys weren't hurt. County constables transported the boys to their families.