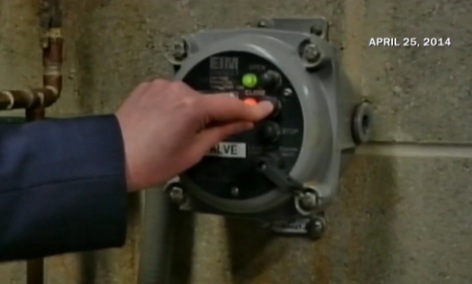 FLINT, Mich. -- The Flint water crisis started with a flip of a switch -- quite literally.

The beginnings of the lead problem can be traced to shortly after April 25, 2014, when former Flint Mayor Dayne Walling flipped a switch -- moving the city's water supply from Detroit to its own system, where the main water source was the Flint River.

"Not a day or night goes by that this tragedy doesn't weigh on my mind," Michigan Governor Rick Snyder told members of the House Committee on Oversight and Government Reform on Thursday.

Now, two years later, Snyder and EPA Administrator Gina McCarthy are both feeling the heat for the toxic lead poising that infiltrated not only Flint's water system, but possibly most importantly, the children living in the city.

"People realized that children were getting lead poisoned and potentially contracting these water-borne diseases because the law was not being followed," said Virginia Tech professor Marc Edwards, who uncovered that the water was creating a public health threat.

Dr. Mona Hanna-Attisha first warned city officials in Flint to stop using the Flint River for water in September 2015. It wasn't until October 16, 2016, that the city officially switched back to using Detroit's water.

"Lead should never touch a child," said Dr. Hanna-Attisha, a pediatrician in Flint. "So if it's detected in a child, it's almost too late."

And the switch back may have been too late for some children, who had already been exposed to lead.