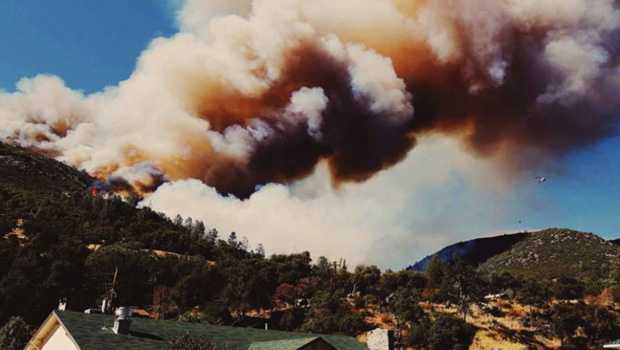 PLYMOUTH, Calif. -- Fire crews increased containment Monday on a wildfire burning near vineyards in Northern California, and officials discussed the possibility of lifting evacuation orders for at least some of the roughly 1,200 people affected.

The fire in the Sierra Nevada foothills east of Sacramento was held to a little under 6 square miles overnight while containment increased by 15 percent, to 65 percent, State fire Battalion Chief Scott McLean said.

"We're still very cautions. We're not going to get complacent, but it's looking very good," he said.

It's one of two wildfires in the state that has forced people from their homes. The other has burned about 4 square miles near Yosemite National Park and forced the evacuation of an estimated 100 homes in Foresta and the small community of Old El Portal.

Plymouth resident Dolores Stephenson told CBS News, "The Sheriff came to the door and said, 'You have to evacuate now!'"

The park itself, home to such sites as Half Dome mountain, Yosemite Meadows, a grove of Giant Sequoia trees and other wonders, remained open, and authorities said none of its treasures was threatened. As correspondent Mojgan Sherkat of CBS Station KOVR reported, the normally pristine Yosemite Valley and the iconic image of Half Dome were barely visible through a thick cloud of smoke.

Both the Sierra foothills fire and the blaze near Yosemite National Park took off quickly after they began.

"We feel for individuals that have been evacuated," McLean said. "We're actively pursuing getting some of these folks back to their homes."

McLean, however, said he did not know when residents might be allowed back even as officials were optimistic about getting the upper hand on the blaze. Full containment was now expected Friday, earlier than initially estimated.

Crews have been challenged by triple digit temperatures and steep terrain that sends heat upward and further dries out the land.

But McLean said in a good sign, he saw blue skies above the fire Sunday afternoon instead of smoke.

The fire started Friday when a vehicle drove over vegetation. In addition to the homes and cabins, it has destroyed a collection of 13 antique cars that a man was restoring in the town of Plymouth, the Sacramento Bee reported.

Neighbors have stepped in to help those forced from their homes and ranches.

The Amador County fairgrounds made room for displaced animals and as of noon Sunday had taken in 12 horses, seven rabbits, 15 chickens, two dogs, three cats and seven goats, said Karen Spencer, the marketing director for the Amador County Fair.

"We're right in the middle of our fair, but our livestock people are just moving over and making room," she told the Bee.

While the Red Cross has been able to provide clothes and food for the evacuees, the neighboring communities have joined the organization to help.

"We've got like 10 bags of new and slightly new clothes," Rodney Stanhope of Placerville said.

Stanhope said his Facebook call has led to people offering to buy underwear and socks and others offering their homes to evacuees.

"Everybody wants to help," Stanhope said.

In Central California, the fire near Yosemite National Park has destroyed one home and sent plumes of smoke over the park.

Wildfires also burned in other Western states, including Washington, Oregon, Colorado and Utah.

In north-central Washington, the Carlton Complex fire, the biggest in the state's history, burned as temperatures rose Sunday, but no major flare-ups have been reported.