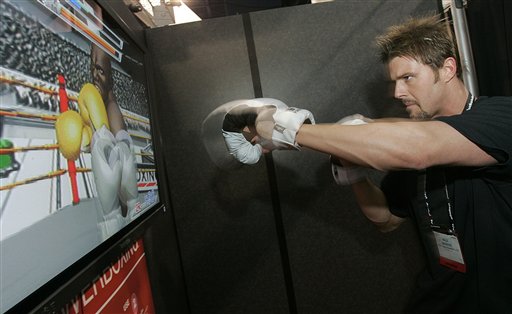 Ciccarelli became the ninth player in NHL history to reach the 600-goal plateau, and he did it against his former club.

The goal was the third for Ciccarelli since joining the Panthers Jan. 16 in a trade with Tampa Bay. Ciccarelli spent four seasons in Detroit before moving to the Lightning.

Ciccarelli's goal prevented what would have been an emotional win for the Red Wings, who were joined at the game by teammate Vladimir Konstantinov.

Konstantinov, who watched the game from a sky box, has been rehabilitating in West Palm Beach for head injuries sustained in a limousine accident days after the Red Wings won the Stanley Cup.

Ciccarelli's power-play goal was a result of a holding penalty against Igor Larionov.

Florida's Ray Whitney began the play with a shot that was wide. Scott Mellanby rebounded the puck and flipped it across the slot to Ciccarelli, who wristed it past Chris Osgood.

Red Wings defenseman Larry Murphy gave Detroit a 1-0 lead at 2:38 of the first period. That lead stood until Ciccarelli's goal tied the game.

Murphy scored on a shot that was deflected by defenseman Ed Jovanovski.

The play started when Florida defenseman Jeff Norton lost the puck to Tomas Holmstrom, who fired off a shot that Florida goaltender John Vanbiesbrouck stopped.

Murphy rebounded the puck and let loose from the top of the circle. The puck deflected off the leg of Jovanovski and then through the legs of Vanbiesbrouck.

Detroit has the league's second-best road record at 13-7-7.

The Panthers wrapped up their recent five-game homestand with a 3-1-1 record.

The Panthers were without coach Bryan Murray, who was in Arizona for the general managers meetings.