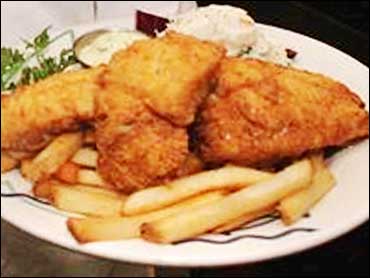 Fish and chips remain the most popular takeout food in Britain. In fact, about 25 percent of all white fish consumed in Britain is battered and fried.

You can concoct a delicious version of this British staple in your own kitchen. The Early Show resident chef Bobby Flay shows us how Thursday morning.

Nobody can pin down exactly where or when fish and chips originated. The first mention of fish and chips was in the Charles Dickens novel "Oliver Twist," published in 1837. In the 1850s, traders began selling pieces of fried fish and potatoes wrapped in newspaper on the streets and alleys of London. An official fish and chip shop opened about 10 years later, and the rest is history.

Cod or Haddock is the most common fish used to make the fried dish, but you can use any firm white fish that won't fall apart when fried. Just make sure to cut the fish into uniform size pieces so it cooks evenly.

The pieces of potato are "chipped" off of the whole potato. So in Britain, fries are called chips. What is refer to in America as potato chips are called "crisps" across the pond.

Traditionally, fish and chips are served with malt vinegar. Malt vinegar comes from malted barley - the same grain used in beer. So it makes sense that malt vinegar would compliment beer-battered fish. Malt vinegar has a pungent taste with lemon undertones.

For his dish, however, Flay pumps up the heat by serving it with his own serrano vinegar. And makes his own lemon-habanero tartar sauce, which takes almost no time to make in a food processor.