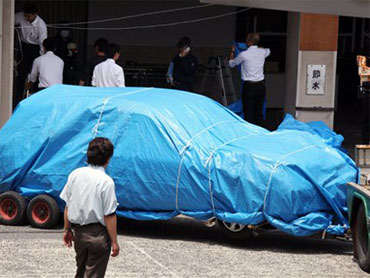 A disgruntled worker slammed his car into employees at a Mazda factory Tuesday, killing one and injuring 10, stunning Japan just two years after an autoworker went on a deadly rampage in central Tokyo.

Toshiaki Hikiji, 42, was arrested about an hour later on attempted murder charges after fleeing in his car from Mazda's Ujina plant in Hiroshima prefecture, southwestern Japan, police said.

Japanese media reports said Hikiji was a contract worker who had been let go in April. He bore a grudge against the automaker and went there with a knife with the intention to kill, they said.

But Mazda Motor Corp. spokesman Kotaro Minagawa said he had quit in April on his own, citing personal reasons, after working just eight days at the plant, and there had been no reports of troubles.

The rampage has revived memories of a stabbing spree in Tokyo's jam-packed electronics shopping district two years ago, also by an angry autoworker, that killed seven people when he slammed a truck into a crowd and then stabbed onlookers.

Hikiji ignored security at the gate and drove into the plant as workers were arriving in the morning. Killed was Hiroshi Hamada, 39, a permanent employee, known as "seishain," the company said.

"I pray for the spirit of the man who was killed, and pray for the recovery of the 10 who were injured," Mazda President Takashi Yamanouchi said in a statement.

For decades during Japan's modernization, its major companies guaranteed jobs for life and offered relatively good benefits in return for loyalty.

But automakers, pinched by cost-cutting efforts amid globalization, are increasingly relying on workers called "haken," who are hired on less attractive contracts than regular workers, often through job-referral companies.

Koetsu Aizawa, professor of economics at Saitama University, said the discriminatory dual system of employment was common at major Japanese companies because regular workers, hired under a lifetime employment system, can't be fired.

"Japan still needs to foster the idea of equal pay for equal work," he said. "What many Japanese feel is that regular workers do little work but have big attitudes and get big money. It is a huge social problem."

The manufacturers can better respond to changes in market demand with haken workers because they cannot generally dismiss regular employees.

At Hiroshima-based Mazda, contract workers such as Hikiji are hired on a six-month basis, but have contracts directly with Mazda and not with referral companies, which the automaker stopped using last year, Minagawa said.

"They help us when things get busy because production fluctuates," he said of the contract workers, but declined to disclose details of the wage differences.

The Ujina plant is Mazda's main auto assembly plant, churning out popular models like the Demio, known as the Mazda2 overseas, and the Roadster.

The plant, which employs 7,000 people - 400 of them under temporary contracts - was operating as normal after the rampage, Minagawa said.

In the 2008 case, 25-year-old Tomohiro Kato, who worked at a Toyota Motor Corp. affiliate, had posted angry messages on the Internet about his job and is believed to have carried out the killings in a fit of rage.

Such crimes are rare but rising in number in Japan after years of lackluster economic growth have widened the gap between the have's and have-not's. Disaffection among marginalized individuals can grow intense because of unrealistic expectations about success.

Japan has extremely strict gun-control laws and its culture encourages conformity and passivity.