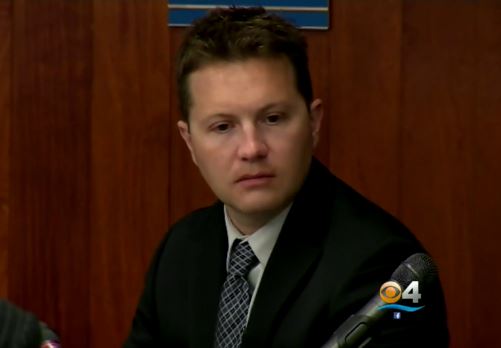 FORT LAUDERDALE - One of the four Fort Lauderdale police officers fired in a racist text message scandal spent the day fighting to get his job back. He brought his girlfriend as a witness to an arbitration hearing who he claims proves he is not a racist.

In Tuesday's hearing for fired officer Jason Holding, his African-American girlfriend testified he is a good person, reports CBS Miami.

Michel continued, "He's a cop, he shouldn't have said that word, correct."

She added that she doesn't believe Holding used the "N" word in a hateful way.

Holding's voice choked and his parents cried in the hearing room as he apologized for texts that were laced with bigoted comments.

"I am not a racist, I have never been a fascist, I'll never be a racist," Holding said.

Holding said he became "numb" to the use of racial slurs because he heard them constantly from the black community, black officers and white officers.

"That is not who I am," Holding said.

"It's a 24/7 job," Adderly said. "On duty, off duty, whatever you do, once it comes to light, you're a police officer. Everyone is going to look at your actions."

The officers allegedly created a video that was "racially biased" and the others exchanged racist text messages among themselves, according to Chief Frank Adderley.

He also said there was a Ku Klux Klan (KKK) hood seen in the video which also takes shots at President Barack Obama by depicting him with large gold teeth, and even stages a mock execution of a black suspect.

Adderley said, and activists agreed, that the behavior of the four officers has set community relations back decades.

"This is pure hatred and racism. It is obviously morally repugnant, and we cannot have this in our community," said Marsha Ellison, president of the Broward NAACP.

In February, an arbitrator refused Wells' bid for reinstatement.

Sousa chose not to appeal his dismissal.

However, none of these cops have had their licenses to be cops revoked. That's because at the time, under state rules, bigoted speech was not cause to have your certificate taken away.

These officers, regardless of how the appeals regarding Fort Lauderdale job come out, will be free to work at whatever agency will have them.