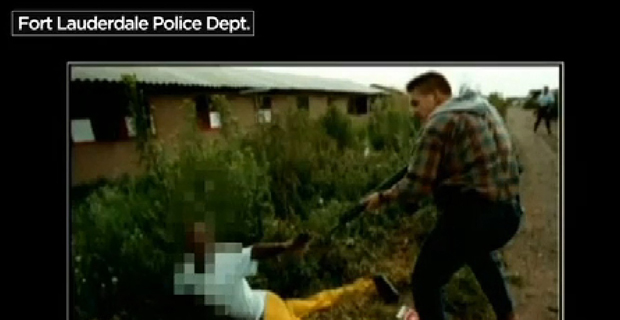 "The officers were terminated due to a sustained department misconduct," Chief Frank Adderley said during a news conference Friday. "The four officers conduct was inexcusable, and there is zero tolerance for this type of behavior within the Fort Lauderdale Police Department."

Adderly said while the officers didn't engage in criminal conduct, their behavior was inexcusable.

According to CBS Miami, the video was allegedly made by Alvarez. Styled as a movie trailer, it included "racially insensitive" images including attacks on minorities, a Ku Klux Klan hood and a caricature of President Barack Obama with large gold teeth.

"Its attempt was to damage our agency, and I just hope that the people in the public realize that we're not going to tolerate it, and that anyone that's engaged in this behavior, it's going to be addressed immediately," Adderly said.

Some of the text messages mentioned killing and injuring black people, CBS Miami reported. According to an investigative report obtained by the station, "The messages criticized their coworkers' grammar, appearance, work ethic and referred to an entire shift as lazy (expletives).... The officers also exchanged text messages that included derogatory comments towards Hispanics and homosexuals."

"I am very disappointed, disgusted and shocked by this incident," Mayor Jack Seiler said. "The inappropriate, racist behavior exhibited by those involved is unacceptable and it is reprehensible."

According to Adderley, the officers had worked in predominantly African American neighborhoods. The investigation started in October 2014, when Alvarez's former fiancée filed a complaint.

"She said she had personally seen it herself and felt it was inappropriate," Adderley said. He said the officers "felt -- in their words -- that it was a joke."

The woman spoke by phone with CBS Miami reporter Carey Codd on Friday and said she stood by her decision to turn over the video and text messages.

"We cant have people like this protecting us," she said.

"It is extremely unfortunate that these acts of racism and hate ever took place and that these Fort Lauderdale employees acted in this manner," said City Manager Lee Feldman.

One of the officers had recently been disciplined for mishandling property belonging to a person who had been arrested, according to Adderley.

The issue is the latest in a series of troubles for Fort Lauderdale. First, the controversy over feeding the homeless. Then a police officer was caught on video slapping a homeless man and now the racist video and texts. Mayor Seiler admitted the city has taken some hits. But he doesn't see an broader problem within a police department of more than 500 officers.

"That is not a reflection in my mind of a problem within the police department," Seiler said. "It's a reflection of a few bad apples in a bunch."

Jasmen Rogers is with the group Dream Defenders. She believes the video and text messages show there is a breakdown between the police department and the African American community.

"Yeah, they're fired but now you've traumatized a whole community that they were policing," she said. "So what are you going to do now?"

The Fraternal Order of Police Lodge #31 represents the officers. FOP President Jack Lokeinsky said in a statement that everyone is entitled to due process, and the officers have the right to a fair review of the facts.

"The Fraternal Order of Police is a multicultural organization which does not tolerate racism, the statement said. "Our officers take great pride in our commitment to diversity. Our dedicated officers have positive relationships with residents in every community we serve."

In response to the incident, Adderley said the City of Fort Lauderdale created a human diversity class that every officer has to attend on an annual basis. They said they will also evaluate the process of screening new employees.