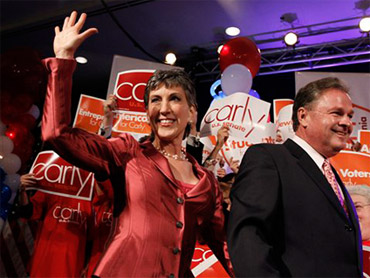 Republican Senate candidate Carly Fiorina on Tuesday drew a rebuke from Democratic Sen. Dianne Feinstein after suggesting the two would be able to work together better on some issues than Feinstein does with fellow Democratic Sen. Barbara Boxer.

Fiorina told a group of reporters in Washington, D.C., that Feinstein and Boxer differ on several important topics, including water allocations to Central Valley farms and funding for veterans. Fiorina is challenging Boxer, who is running for a fourth term.

Feinstein, who is Boxer's campaign chairwoman, later issued a statement saying there is no daylight between her and Boxer on issues that matter most to Californians. She said the two have worked together to create jobs in California, defend a woman's right to choose and protect California's coast from additional offshore oil drilling.

"Let there be no doubt that I believe California needs Barbara Boxer in the Senate, now more than ever," Feinstein said.

Fiorina said among the first things she would do if elected is work with Feinstein to increase water deliveries to Central Valley farmers. Pumping has been limited in recent years because of drought and federal restrictions to protect wildlife, leaving thousands of acres fallowed and leading to an unemployment rate that exceeds 30 percent in some rural pockets.

She praised Feinstein's work in Washington, calling her a pragmatic senator who had accomplished a great deal for Californians.

"While I disagree with her on some things, if you look at her voting record versus Barbara Boxer's, you would find they disagree on virtually everything," Fiorina said.

Fiorina said the two Democrats disagreed on several bills that involved military spending and benefits for their families, as well as some free-trade agreements.

She also said they disagreed on an amendment that would set aside Endangered Species Act restrictions that were designed to protect native fish. The restrictions led to a reduction in water for many farms in the Central Valley.

Boxer said last week that she and Feinstein vote alike more than 90 percent of the time.