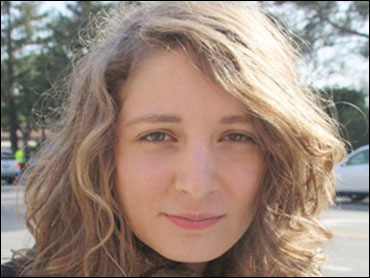 NEW YORK (CBS) Roughly 500 friends, family and fellow students gathered at a Hollywood park on Sunday to say goodbye to 17-year-old Lily Burk, who was brutally slain last month. Many at the ceremony openly wept as friends spoke about the loss of a warm, kind and bright young woman who gave "the best hugs."

Friends read poems by some of Lily's favorite poets, Li-Young Lee and Shel Silverstein, and spoke of her love of music, writing and acting.

Burk's mother, attorney Deborah Drooz, said that losing Lily "empties the world for me" and her father, Greg Burk, a music journalist, remembered his daughter as someone who could "see right into our souls ...and she loved us anyway."

Burk was abducted July 24 from the mid-Wilshire area and driven to an ATM machine, but was unable to withdraw money for her captor.

She was reported missing that evening and her beaten body was found in her car the next morning.

Her throat had been slashed. Police have since arrested a 50-year-old transient, Charles Samuel, and charged him with murder, kidnapping to commit robbery, robbery and attempted robbery from an ATM.