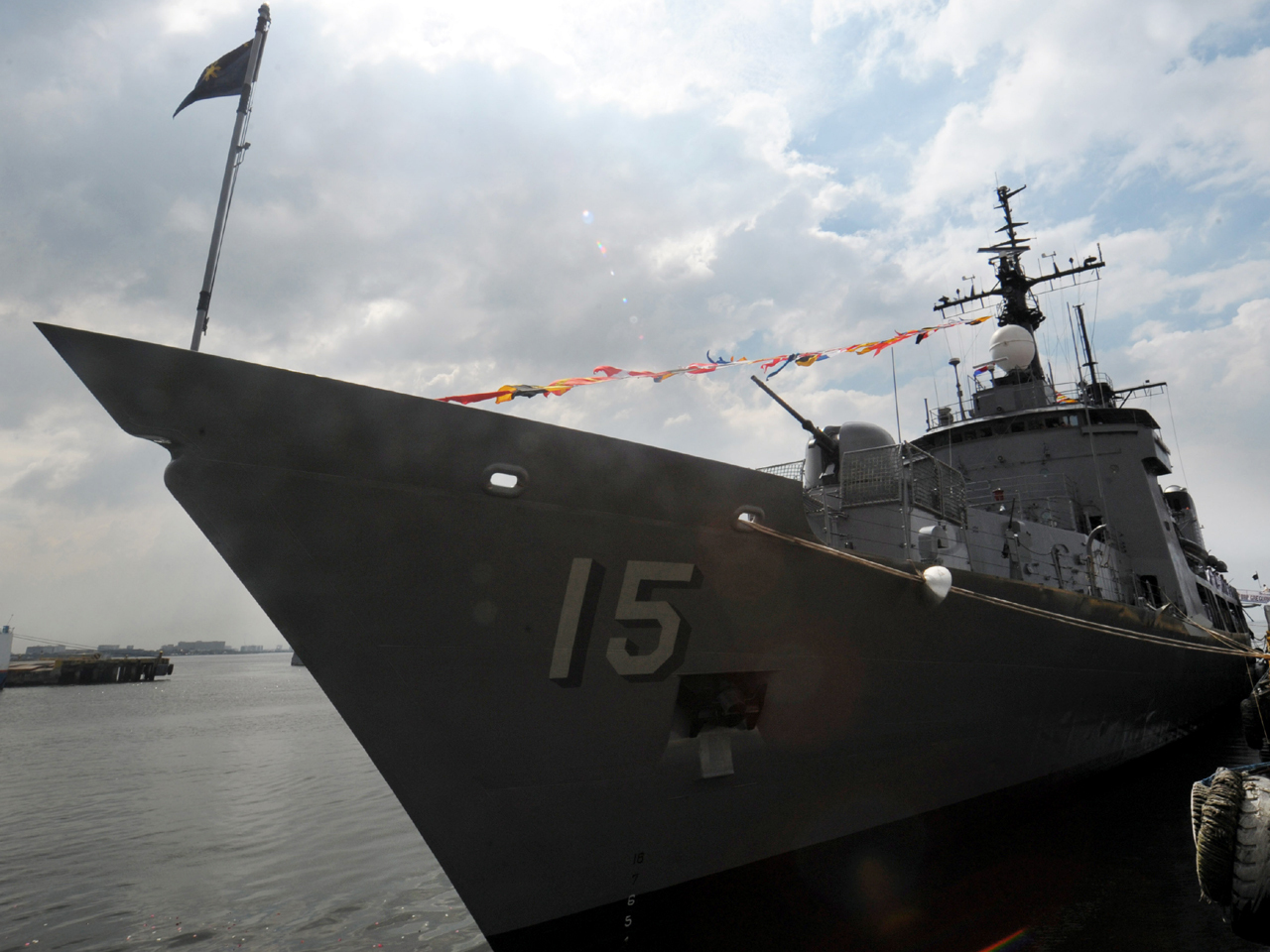 (AP) MANILA, Philippines - The Philippines' largest warship was engaged in a tense standoff with Chinese surveillance vessels Wednesday at a disputed South China Sea shoal, after the ship attempted to arrest Chinese fishermen but was blocked by the surveillance craft.

Philippine Foreign Secretary Albert Del Rosario has summoned Chinese Ambassador Ma Keqing in an attempt to resolve the impasse diplomatically. Del Rosario's office said in a statement that the Scarborough Shoal "is an integral part of Philippine territory" and Filipino authorities would assert sovereignty over the offshore area.

The Chinese Embassy has accused the Philippine warship of harassing the fishermen.

China and the Philippines both claim ownership of the shoal — which lies off the northwestern Philippine province of Zambales — as well as other areas in the South China Sea.

The Spratly Islands south of the shoal are claimed by China, the Philippines, Vietnam, Brunei, Malaysia and Taiwan. The chain of barren islands, reefs and coral outcrops are believed to be in rich in oil and gas and the overlapping claims have long been feared as Asia's next flashpoint for armed conflict.

The current standoff began Sunday when a Philippine navy surveillance plane sighted eight Chinese fishing vessels anchored in a lagoon at Scarborough, the Philippine Department of Foreign Affairs said. That prompted the military to deploy its largest warship, the BRP Gregorio del Pilar, which was recently acquired from the United States.

On Tuesday, Filipino sailors from the warship boarded the Chinese vessels for an inspection, discovering large amounts of illegally collected coral, giant clams and live sharks inside the first boat, the department said in a statement.

Two Chinese maritime surveillance ships, identified as Zhonggou Haijian 75 and Zhonggou Haijian 84, later approached and positioned themselves between the Philippine warship and the Chinese fishing vessels "thus preventing the arrests of the erring Chinese fishermen," the statement said.

Philippine Foreign Affairs spokesman Raul Hernandez said Wednesday that the situation at the shoal "has not changed as of this morning. There's a standoff."

The Chinese Embassy said 12 fishing boats had taken shelter from a storm in a lagoon.

"Two Chinese marine surveillance ships are in this area fulfilling the duties of safeguarding Chinese maritime rights and interests," it said in a statement.

It said the shoal "is an integral part of the Chinese territory and the waters around it the traditional fishing area for Chinese fishermen."

The Philippine navy was sending additional vessels toward the shoal, which lies about 124 miles from the nearest Philippine coast, a Philippine navy official told The Associated Press. He spoke on condition of anonymity because of a lack of authority to discuss the situation with the media.

Del Rosario protested to Ma, the Chinese ambassador in Manila, late Tuesday and told her that the navy would enforce Philippine laws, according to his office.

Last year, the Philippines accused Chinese vessels of intruding into other parts of what it considers Philippine territory in the South China Sea. China has regularly dismissed the protests, saying Beijing has indisputable sovereignty over those areas on historical grounds.

The United States has insisted it takes no sides in the territorial dispute but says it should be solved peacefully. China has balked at what it considered a U.S. interference in the region.

The disputes over the Spratlys have settled into an uneasy standoff since the last major clash involving China and Vietnam killed more than 70 Vietnamese sailors in 1988.

Faced with China's formidable military, the Philippines and Vietnam have forged closer ties. Aside from military accords, the two countries have agreed to set up a hotline between their coast guards and maritime police to monitor maritime incidents, such as piracy and incursions into their territorial waters.

The Philippine navy announced Tuesday that Philippine and Vietnamese would play football and basketball matches in the islands they occupy in the Spratlys as a novel way to build trust in the contested region.

Biden and Putin to speak amid tense military standoff in Ukraine