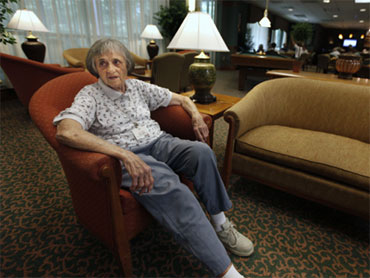 How else to explain the reservations of seniors like 85-year-old Dee Jollie, who are covered by Medicare, the government health insurance program for Americans 65 and older, yet still have deep concerns about President Barack Obama's proposed health care overhaul?

"I think it'll be government control," Jollie said this week while waiting for her congressman to hold a health care town hall meeting at her upscale retirement home.

"When that occurs, you don't have any control," Jollie added. "I think we will no longer be able to choose our own doctor," she said - notwithstanding repeated claims to the contrary from Mr. Obama, whom she supported for president.

The trepidation that's taken hold among the elderly over President Obama's drive to remake the nation's health care system is turning into one more political headache for Democrats as they struggle to reach agreement on sweeping health legislation that can pass the House and Senate after Labor Day.

Older Americans, who vote at a higher rate than other age groups, also hold deeper concerns than others about proposed health care changes, surveys have shown. An ABC/Washington Post poll this month found 45 percent of respondents overall supporting Democrats' proposed health care changes, while just 34 percent of seniors were in support. The elderly use health care services more than others and have perhaps the most to lose and least to gain from any changes in the present system.

Republicans are moving to exploit those concerns, producing a "Seniors' Health Care Bill of Rights" this week that touches on sensitive points, including protecting Medicare and ensuring government doesn't come between patients and doctors.

Democrats accuse the GOP of fear-mongering around claims about fictitious "death panels," rationing and nonexistent threats to Medicare, which covers 38 million seniors. They insist seniors' health care will be safeguarded.

Yet a problem for Democrats is that mixed in with the misinformation are some real causes for concern, some analysts say.

Evolving health care legislation probably will be paid for in part by cutting some $500 billion from Medicare over 10 years. Mr. Obama and his supporters say the cuts would not affect benefits and would strengthen Medicare by reducing fraud and abuse and attacking inefficiencies (such as unnecessary hospital readmissions) and overpayments to insurance companies that operate private plans within Medicare. But some health care experts say some seniors will probably have to pay more along the way.

"Seniors are rightly concerned that half a trillion dollars in cuts might have some impact on access and quality of care," said Mark McClellan, a doctor and health economist who ran Medicare for former President George W. Bush and also served in the Clinton administration.

McClellan said the concerns could be particularly justified for the 25 percent of Medicare users who are covered through private Medicare Advantage plans, which would absorb about 30 percent of the cuts under Democratic proposals.

If Democrats can't succeed in allaying such fears, it could spell trouble for President Obama's goal of passing a health care overhaul bill this year.

"The American public in general has to be supportive of health care reform, and obviously seniors are a big part of that," said David Certner, legislative policy director at AARP, which has lost some 60,000 members recently over its support for a health care overhaul even though it has yet to endorse any specific proposal.

"They're big users of health care. And combining the fact that it's more personal to them as an issue and they vote in higher numbers, it's a critical constituency," Certner said.

Those Medicare cuts bothered some seniors at the Greenspring Retirement Community, where Democratic Rep. Gerry Connolly held his town hall.

"They're going to take it away from Medicare," Florence Arden, 86, said after the lively but civil meeting. She said Medicare is at risk because officials want to "cut down on all the programs ... and spread it around."

"No, it isn't," disagreed her friend and ballroom dancing companion Yvonne Fisher, 85.

"I think a lot of lousy myths are going around," Fisher said.

"I don't think this administration is too fond of older people," Arden countered.

Connolly and others say Democrats have done a poor job getting the message to seniors about how they could benefit under the legislation. Measures include reducing or eliminating a gap in prescription drug coverage under Medicare, eliminating co-pays and deductibles for preventive services, extending subsidies to more low-income seniors, and plowing some $245 billion into Medicare to ensure physician payments are not cut in coming years.

"You could see reassurance start to ripple through the audience as we got into substantive discussion, put out some fires, false fires, and started to talk about the basket of reforms that really make sense," Connolly said.

He noted that concerns about socialized medicine and government control were also expressed in the mid-1960s, when Medicare was created.

"Many of the same fears were voiced then," Connolly said. "Do you think one Republican in this room or one Democrat or one independent would give up his or her Medicare? Not one of them."