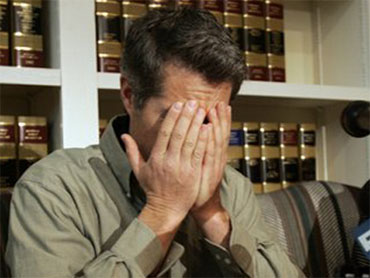 The Brazilian family of a 9-year-old boy returned by court order to his U.S. father said Tuesday it will fight to regain custody.

Lawyers for the relatives of Sean Goldman said they will push forward with a request from his Brazilian grandmother to allow the boy to make his own wishes known in court.

The grandmother's request was initially denied, but the Supreme Court has not issued a final ruling on that matter. The court does not convene until February.

At a news conference Tuesday in New Jersey, his first since arriving back in the U.S. with Sean on Christmas Eve, Goldman and his attorney, Patricia Apy, said they did not know exactly what sort of claim the Brazilian family would make.

"Part of what we're going to wait to see is if they're going to exercise good judgment and move forward as normal grandparents," Apy said.

Goldman said his son arrived in New Jersey on Monday after spending some time in Orlando, Fla., and was eager to play outside, even in the cold New Jersey wind. The boy is likely go to public school, though he has not yet been enrolled.

"He hasn't cried, he's just happy," Goldman said. "He just wants to have fun and not have all this pressure on his shoulders."

"Last night ... as we were coming home," Goldman told reporters, "He said, 'Where is our home?' " His voice cracking, Goldman added, "Just to hear him say 'our home' -- I waited five years for that."

" ... As a parent, to just go in there and stroke their hair and just kiss them on the forehead and know, after 5 yrs, I know that my son is safe and sound, asleep in his bed -- it's a gift from God."

Goldman estimates his fight for custody of Sean has cost him $500,000 in legal fees alone, Gallegus notes.

Just three days before Christmas and following a five-year custody battle, Supreme Court Chief Justice Gilmar Mendes lifted a stay on a federal court's ruling ordering Brazilian relatives to hand over the boy. Sean was reunited with his father on Christmas Eve and returned to the United States the same day.

Before delivering Sean to his father, the Brazilian relatives said they would end a legal battle to keep the boy in Brazil. On Tuesday, however, their attorneys said the family was only obeying the judge's order, not stopping its legal fight.

The lawyers said that if the Supreme Court rules in favor of the grandmother, Silvana Bianchi, the decision will be relayed to American authorities so the boy can be heard.

Bianchi has always maintained that Sean wanted to stay in Brazil.

Goldman said in an exclusive broadcast interview aired Monday that the boy was happy in the U.S., but hadn't yet called him "Dad."

Sean had lived in Brazil since 2004, when Goldman's ex-wife, Bruna Bianchi, brought him to her native country for what was supposed to be a two-week vacation. She stayed, divorced Goldman and remarried, and Goldman, now 42, began legal efforts to get Sean back.

Also Tuesday, a professional media group criticized NBC for ferrying the Goldmans back to the United States on a chartered plane.

Calling it an example of "checkbook journalism," the Society of Professional Journalists said the arrangement damages the network's credibility.

NBC spokeswoman Lauren Kapp said the network invited them to ride on a plane that had already been booked to carry its own employees home for the holidays, and "Today's" exclusive interview was booked before the invitation was extended.

An attorney for Goldman said Tuesday that there was never a contract with NBC and that the Goldman camp was loyal to the network because it did a thorough report on his situation a year ago, before the story became major news.

"There was no quid pro quo," Apy said, adding that some other media outlets suggested favors in return for access, and that Goldman turned them down.

She said Goldman accepted the flight in part because of fears that multiple camera crews might be onboard if they flew back to the U.S. on a commercial flight.