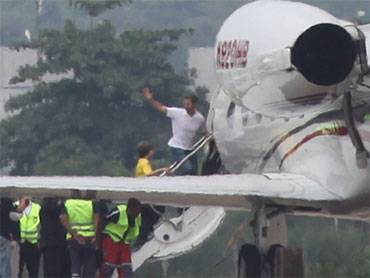 The Society of Professional Journalists condemned NBC News for practicing "checkbook journalism" by chartering a jet that carried a New Jersey man involved in a bitter custody battle and his son home from Brazil.

David Goldman, who successfully fought the Brazilian family of his now-deceased ex-wife for custody of 9-year-old Sean, granted an interview to Meredith Vieira of NBC's "Today" show that aired Monday.

NBC said Goldman was booked for "Today" before the network invited him on the plane. The network had already arranged for the plane to bring its own employees home for Christmas, NBC News spokeswoman Lauren Kapp said. If NBC hadn't brought the Goldmans' home, one of its rivals would have, she said.

"We've covered this story exceptionally well," she said. "Their going on the plane did not affect our coverage of the story or getting them booked at all."

NBC News told viewers that it had paid for the Goldmans' trip home, she said. The network showed pictures of the Goldmans on the plane and on "Nightly News" featured a brief interview by correspondent Jeff Rossen with David Goldman while both were on the plane.

The journalists' group said NBC News jeopardized its integrity with the arrangement.

"Paying for access taints the credibility and neutrality of what you are doing," said Andy Schotz, chairman of the SPJ ethics committee. "There is now a motive for people to be helping you, to be telling you what you want to hear."

Most news organizations say they don't pay for interviews. But critics say the commonly used practice of paying to license photos or video from a subject matter or paying for someone's travel is a way of getting around the restriction.

At the same time SPJ criticized NBC News for its conduct with the Goldmans, CNN and ABC paid for cell phone pictures taken by Jasper Schuringa, the man who helped subdue an alleged terrorist who tried to take down a Detroit-bound plane. Both also interviewed Schuringa but denied any connection between the payments and interview.

Kapp said she believed NBC News did nothing wrong by chartering the plane.

The Goldmans "were invited on as guests," she said. "This was not a booking strategy."

Goldman's lawyer, Patricia Apy, said Tuesday that Goldman never had a contract with NBC. She said the Goldman camp was loyal to the network because it did a thorough report on his situation a year ago before the story became major news.

Some media outlets offered favors in return for access, Apy said, but Goldman turned them down. She declined to say which media outlets were involved.

She said Goldman accepted the flight in part because of fears that multiple camera crews might be onboard if they flew back to the U.S. on a commercial flight.