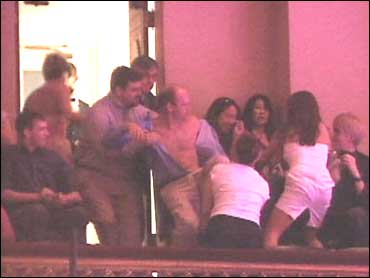 Concert-goers and even Boston Pops conductor Keith Lockhart were caught off-guard when a fight broke out on opening night at the usually sedate Symphony Hall in Boston, Mass.

Video of the fight on Wednesday night showed two men struggling in the balcony — one with his shirt pulled off — as several people stood around them.

CBS Station WBZ correspondent Joyce Kulhawik said one man objected to another man's talking. "A woman screamed, then suddenly it came to fisticuffs."

Witnesses said they heard a scream from the balcony, and the sound of chairs falling, then a second scream as the fight escalated.

At that point, Lockhart halted the performance while police intervened.

Boston police spokesman David Estrada said police officers on security detail at the hall escorted the men off the property, and no charges were filed. No injuries were reported, he said.

"It was an unfortunate incident, but thankfully this kind of behavior is truly out of the ordinary at a Boston Pops concert," the orchestra said in a statement. It referred calls to the Boston police department.

The performance launched the 122nd season of the Boston Pops.

The fight broke out during a medley of tunes from the movie musical "Gigi." Kulhawik noted, dryly, "It has that effect on some people."