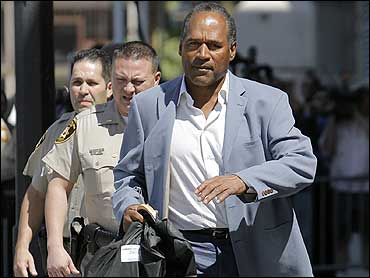 A fifth suspect in the O.J. Simpson armed robbery and kidnapping case surrendered to police on Wednesday, a few hours after Simpson was freed on bail. One more suspect remains at large.

Police say Charles Howard Cashmore, at the time of his surrender, also turned over to authorities a number of items that are among those allegedly taken in the incident Sept. 13th at a casino hotel in Las Vegas.

Investigators are still searching for another suspect involved in the alleged hotel room heist which the former football great described as a sting operation to recover items he believes are his property.

The group of five men and Simpson are accused of breaking in to the hotel room and robbing two sports memorabilia collectors of autographed footballs and other items.

Police did not specify which items Cashmore turned in. He is scheduled to appear in court Thursday morning.

Earlier Wednesday, a judge set bail for Simpson at $125,000. He posted the bond and was released within hours. Simpson was planning to return to his Florida home, his lawyer said.

Simpson, standing in court in a blue jail uniform and handcuffs, furrowed his brow as the judge read the list of charges against him during a 10-minute hearing.

He answered quietly in a hoarse voice and nodded as Justice of the Peace Joe Bonaventure Jr. laid out restrictions for his release, including surrendering his passport to his attorney and having no contact with co-defendants or potential witnesses.

Simpson did not enter a plea.

Unlike his arraignment over a decade ago in the 1994 killings of his ex-wife and her friend Ron Goldman, when Simpson declared he was "absolutely 100 percent not guilty," he was subdued throughout the proceeding Wednesday.

"Mr. Simpson do you understand the charges against you?" the judge asked.

Attorney Yale Galanter said after the hearing that Simpson will plead not guilty.

"Bail deals like this happen all the time in routine cases and it's a good sign that defense attorneys and the district attorney at least are starting this case off on the right foot with good communication and cooperation," said CBSNews.com legal analyst Andrew Cohen.

"The case now is going to slow down tremendously - the next in-court event takes place in mid-October and that's just a status conference to determine where the case goes from there," Cohen said. "In the meantime, I expect there will be a lot of behind-the-scenes negotiations between prosecutors and defense attorneys over potential plea deals."

Pereira said he was not nervous about accepting the bond, which can cost between 10 and 15 percent of the $125,000. The company is responsible for ensuring Simpson attends court hearings.

"He's not a flight risk. I have a gut feeling and I'm good at my job," Pereira said.

Security at the courthouse was tight for the arraignment hearing. People entering the courtroom were screened by security officers and Las Vegas police with bomb-sniffing dogs.

The case has attracted a swarm of media, including Marcia Clark, who unsuccessfully prosecuted Simpson for the 1994 murders and was reporting for "Entertainment Tonight."

Simpson, 60, was arrested Sunday after a collector reported a group of armed men charged into his hotel room at the Palace Station casino and took several items that Simpson claimed belonged to him. He has been held since then in protective custody in a 7-foot-by-14-foot cell.

Authorities allege that Simpson and the other men went to the room on the pretext of brokering a deal with two longtime collectors, Alfred Beardsley and Bruce Fromong. According to police reports, the collectors were ordered at gunpoint to hand over several items valued at as much as $100,000.

Beardsley told police that one of the men with Simpson brandished a pistol, frisked him and impersonated a police officer, and that another man pointed a gun at Fromong.

"I'm a cop and you're lucky this ain't LA or you'd be dead," the man said, according to the report.

"One of the thugs - that's the best thing I can call them - somebody blurted out 'police!' and they came in military style," Beardsley said Wednesday on NBC's "Today" show. "I thought it might have been law enforcement or the FBI or something because I was ordered to stand up, and I was frisked for weapons."

"At no time did Mr. Simpson hold any type of firearm at all," he said.

Beardsley also cast doubt on the authenticity of a recording of the confrontation made by Tom Riccio, the man who arranged the meeting between Simpson and the two collectors. Riccio reportedly sold that tape to celebrity gossip Web site TMZ.com.

"I do not believe that these tapes are accurate," Beardsley said. He said information was missing and the recordings should be professionally analyzed.

Later Wednesday, Beardsley, 46, was arrested in Las Vegas for a parole violation by a fugitive task force at the Luxor hotel and casino, the U.S. Marshals Service said.

Authorities said Beardsley was wanted on a California warrant for a parole violation. He was jailed pending extradition to California.

The Los Angeles Times reported that court records show Riccio has an extensive criminal history from the 1980s and '90s, including grand larceny in Florida, possession of stolen goods in Connecticut and receiving stolen property in California. According to the newspaper, Riccio acknowledged his past in a telephone interview late Tuesday.

Riccio said he was not concerned with how his past might affect his credibility "because everything's on tape. That's why it's on tape."

He also said he had been promised some form of immunity by prosecutors.

The memorabilia taken from the hotel room included football game balls signed by Simpson, Joe Montana lithographs, baseballs autographed by Pete Rose and Duke Snider and framed awards and plaques, together valued at as much as $100,000.

Although Simpson was acquitted of murder charges in the deaths of his ex-wife and Goldman, a jury later held him liable for the killings in a wrongful death lawsuit and ordered him to pay a $33.5 million judgment. On Tuesday, a California judge gave a lawyer for Goldman's father a week to deliver a list of items Simpson was accused of taking from the hotel room, raising the possibility that they could be sold to pay off the judgment.

"He's ordered to pay us millions of dollars," Goldman's sister, Kim Goldman, said in a broadcast interview Wednesday. "If he went to Vegas to go collect on those things so we wouldn't, there's some irony in that."

She also said she felt some satisfaction with Simpson's arrest.

"I'm not going to lie to you, I do feel a little bit of elation to see him in handcuffs," she said. "I hope that in some way the pressure that we put on him for the last 13 years drove him to this."

Two other defendants, Walter Alexander, 46, and Clarence Stewart, 53, were arrested and released pending court appearances. Stewart turned in some of the missing goods and Alexander agreed to cooperate with prosecutors, authorities said. A fourth suspect, Michael McClinton, 49, of Las Vegas, surrendered to police Tuesday.

Police were seeking two other suspects, whom they had not identified.