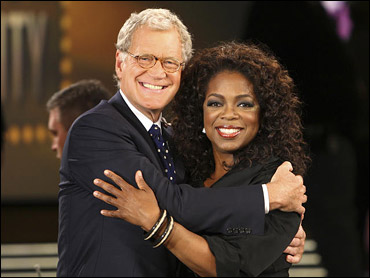 David Letterman says the birth of his son, Harry, has made a "huge difference" in his life - but the 3-year-old doesn't always get daddy's sense of humor.

"Mommy has to tell him a lot that I'm just teasing," Letterman said Monday on the season premiere of "The Oprah Winfrey Show."

It was a rare appearance for Letterman, host of CBS' "Late Show With David Letterman," on someone else's show. Winfrey asked if he's "interview-phobic."

"It's just that, you know, when you have your own show, you have plenty of time to talk about whatever you want to talk about anyway," Letterman said.

Letterman, 60, said he struggles between using "patience or discipline" with Harry, his son with girlfriend Regina Lasko. He said Harry was placed on the "naughty chair" this weekend after misbehaving.

He talked about his love for his home in Montana and how he was honored to have a communications building dedicated in his name at Ball State University, his alma mater. He also showed family photos.

The show was taped at Madison Square Garden in Manhattan instead of the customary Harpo Studios in Chicago to mark the start of the show's 22nd season.

Winfrey, 53, said her relationship with Letterman had warmed. She showed footage of her office in which two photos of Winfrey and Letterman are among photos of Winfrey with John Travolta, Stevie Wonder, Nelson Mandela and her boyfriend, Stedman Graham.

Their rift began when Letterman started showing an "Oprah Log" that he kept on his show. He would record whether Winfrey had called that day to invite him to be her guest.

Winfrey said she believed Letterman's staff would contact her staff if he wanted to appear.

Letterman frequently joked about Winfrey, and she rejected repeated offers to appear on his program. In 2003, she told Time magazine she wouldn't appear with him because she was "completely uncomfortable" as the target of Letterman's jokes.

Their reconciliation began in 2005 when Winfrey appeared on his CBS show. It was her first guest appearance with Letterman, though she twice appeared on his NBC show before he switched networks in 1993.