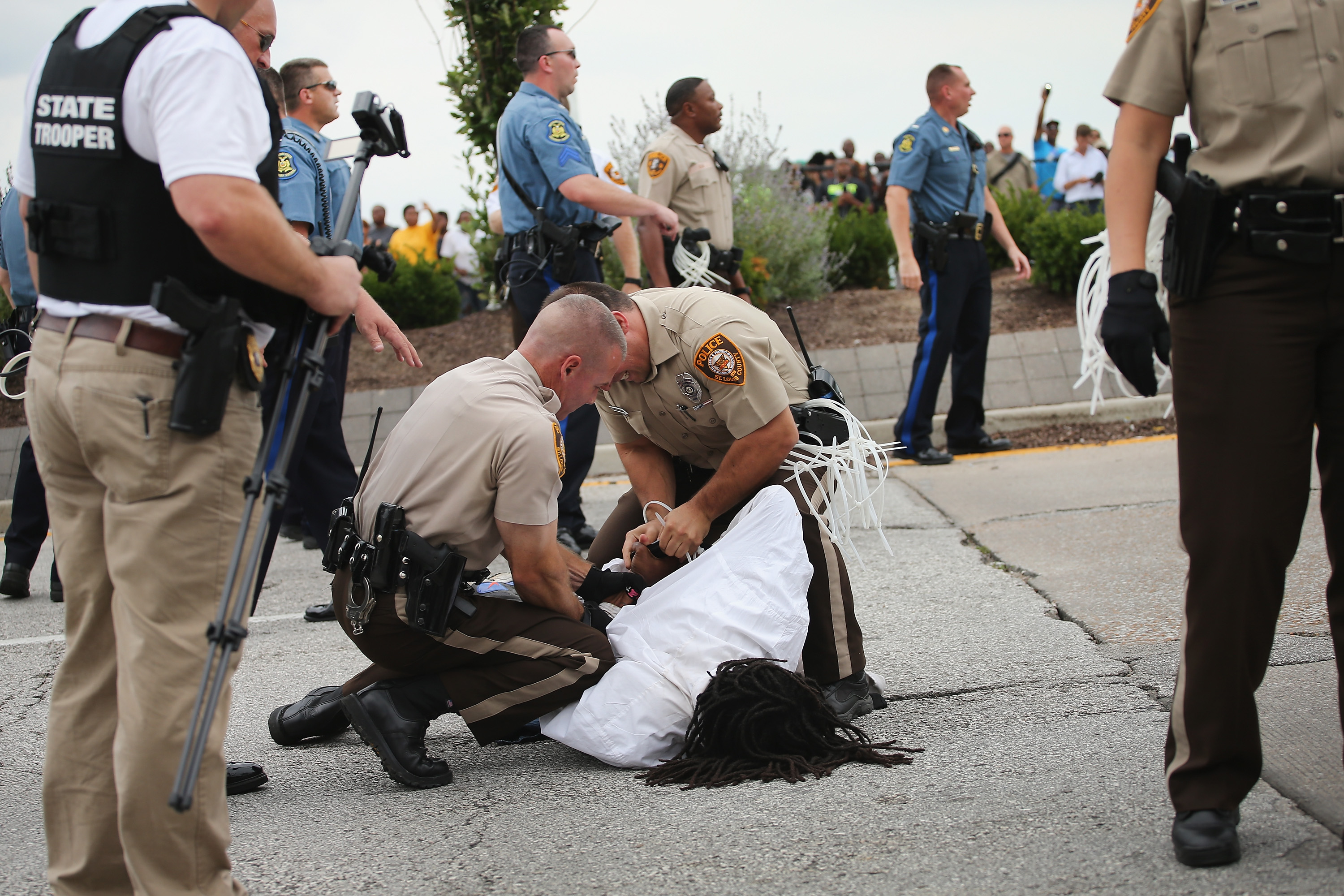 BERKELEY, Mo. -- A planned highway shutdown fell through Wednesday as a wall of officers in riot gear kept Ferguson police shooting protesters from walking onto Interstate 70 in a nearby St. Louis suburb during the late afternoon commute.

State troopers and St. Louis city and county officers warned the roughly 150 demonstrators who gathered to stay out of the road as they protested last month's shooting of Michael Brown, a black, unarmed 18-year-old, by a white officer. There were nearly as many officers as demonstrators.

Organizers said the protest in Berkeley was designed as an act of nonviolent civil disobedience similar to a 1999 demonstration in the same location. During that protest, hundreds of people shut down the interstate in a dispute over minority hiring for road construction projects.

A smaller group later went to the nearby Ferguson police station before a heavy, late afternoon thunderstorm dispersed most of the protesters.

The crowd included about 20 union workers who operate public transit buses and trains for the region's Metro system.

"We're out here to show support," said Antoin Johnson, 30. "We feel that an injustice has been done."

CBS affiliate KMOV reports that on Labor Day, a small group blocked Interstate 270 for a few minutes, despite a plea from Brown's parents not to do so.

About 120 miles away in Jefferson City, the killing of Michael Brown briefly dominated a veto override session at the Missouri Capitol, where a state senator who represents parts of Ferguson called Gov. Jay Nixon a "coward" for his initial response to Brown's death.

Democratic state Sen. Maria Chappelle-Nadal, a vocal critic of Nixon, said the governor "stood by and did nothing until this became a global story."

Nixon has come under heavy criticism for his perceived slowness in response to the shooting and its subsequent looting and unrest. Copies of Nixon's daily schedule provided upon the request of The Associated Press showed Nixon going about his routine business for several days after the shooting, splitting his attention between the unrest in Ferguson and items such as announcing grants to preschools and visiting the State Fair.

Nixon has declined to second-guess his actions, saying Brown's death didn't initially appear to be the sort of situation that a governor should inject himself into.

Wednesday's protest near Ferguson followed a tense meeting of the city's elected leaders Tuesday night. The Ferguson City Council held its first meeting since Brown was killed, hoping to use the gathering as a chance to promote community healing. Instead they were met with anger and warnings from constituents that council members would be voted out of office.

The protesters' chief demand both Tuesday and Wednesday was for the arrest of Ferguson police officer Darren Wilson, whom some witnesses say shot Brown while his hands were raised. They also want St. Louis County prosecutor Bob McCulloch, the son of a police officer killed in the line of duty, to step down over concerns that he can't impartially judge the evidence.

McCulloch, who has tasked a grand jury to review evidence in the case, has refused that request.