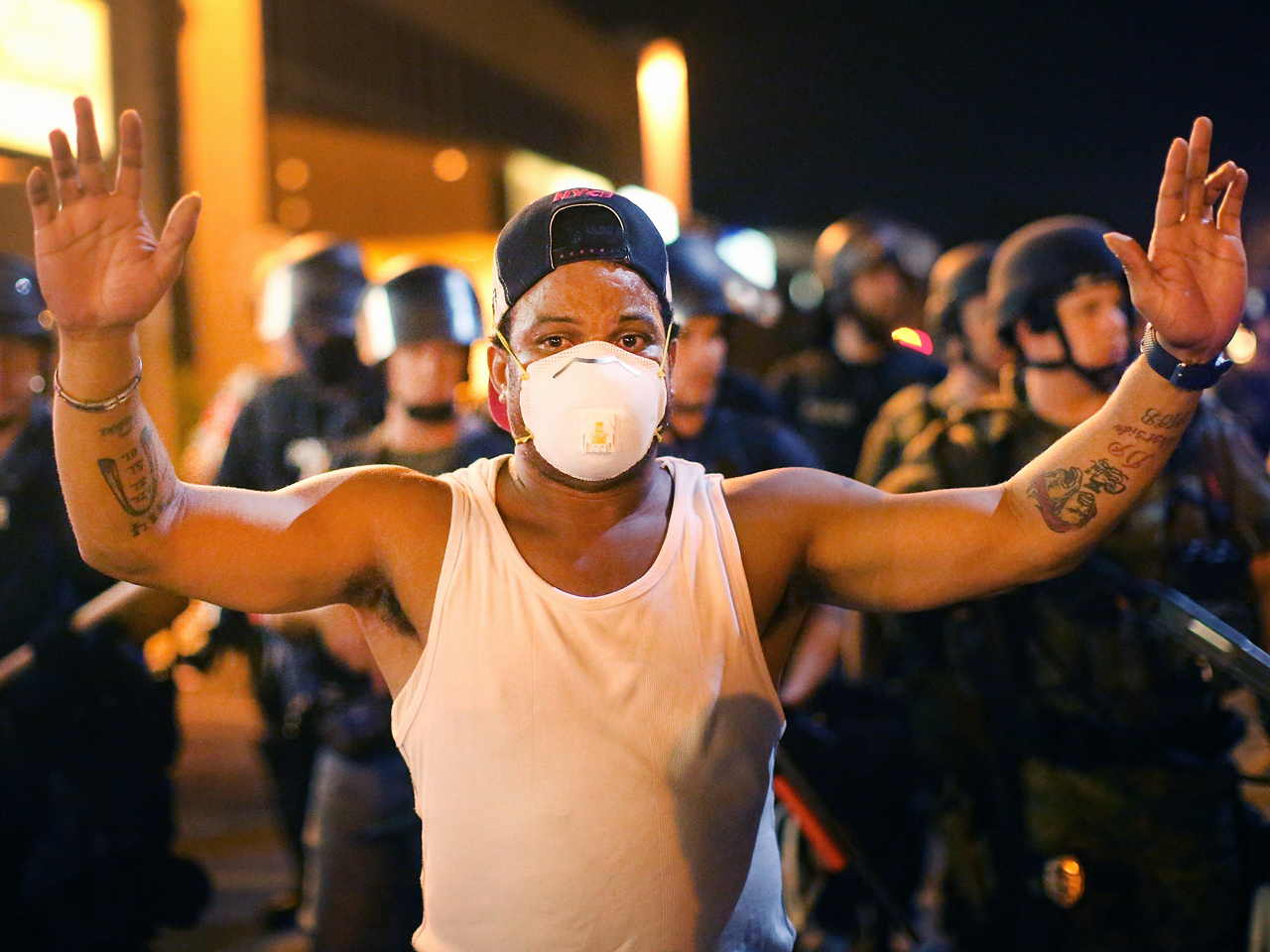 CLAYTON, Mo. -- As U.S. Attorney General Eric Holder made his way to Ferguson on Wednesday, a small group of protesters gathered outside the building where a grand jury could begin hearing evidence to determine whether the police officer who shot 18-year-old Michael Brown should be charged in his death.

Outside the St. Louis County Justice Center in Clayton, where the grand jury was expected to convene, two dozen protesters gathered in a circle for a prayer, chanted, and held signs urging prosecutor Bob McCulloch to step aside. Nearly two dozen officers guarded the building's main entrance, which also was blocked off with yellow police tape.

McCulloch's deep family connections to police have been cited by some black leaders who question his ability to be impartial in the case of Darren Wilson - the white officer who fatally shot the unarmed Brown on Aug. 9. McCulloch's father, mother, brother, uncle and cousin all worked for the St. Louis Police Department, and his father was killed while responding to a call involving a black suspect.

The prosecutor, who is white, has insisted his background will have no bearing on the handling of the Brown case, which has touched off days of rancorous nighttime protests during which authorities used tear gas and rubber bullets to clear the streets of the St. Louis suburb where he was killed.

The protests were more subdued Tuesday night, with smaller crowds, fewer confrontations and no tear gas. Police said they still made 47 arrests, but mainly of people who defied orders to disperse. Tensions rose briefly when someone hurled a bottle at officers, but there were no reports gunfire or the clashes that had marked previous nights.

CBS News correspondent Mark Strassmann reports from Ferguson that while no shots were fired and no Molotov cocktails were thrown there was also no sign that these protests were going away.

On Tuesday night, what began as a peaceful night of protest shifted into yet another street battle as some protesters began launching bottles in the direction of police officers, Strassmann reports.

"The criminals embedded themselves and hid behind media," Missouri State Highway Patrol Capt. Ron Johnson told reporters. "They threw urine on officers, and that's what caused officers to take action."

Johnson called Tuesday night a "turning point" and credited clergy and other local leaders for keeping things calm for most of the evening, CBS St. Louis affiliate KMOV-TV reports.

Police used pepper spray to scatter the crowd, but no rubber bullets were fired, Strassmann reports.

The slight easing of tensions preceded the visit during which Holder was expected to meet with FBI and other officials carrying out an independent federal investigation into Brown's death, as well as with community leaders.

In a letter published late Tuesday on the St. Louis Post-Dispatch website, Holder promised a thorough investigation while calling for an end to the violence in Ferguson. He said the bond of trust between law enforcement and the public is "all-important" but also "fragile."

Arrest patterns "must not lead to disparate treatment under the law, even if such treatment is unintended. And police forces should reflect the diversity of the communities they serve," Holder wrote.

He said the Justice Department would "defend the right of protesters to peacefully demonstrate and for the media to cover a story that must be told."

The department has mounted an unusually swift and aggressive response to Brown's death, from conducting an independent autopsy to sending dozens of FBI agents to Ferguson in search of witnesses to the shooting.

As for the county grand jury, prosecutor's spokesman Ed Magee said Wednesday that there is no timeline for how long the process could take, but it could be weeks.

A day earlier, Missouri Gov. Jay Nixon said he would not seek McCulloch's removal from the case, citing the "well-established process" by which prosecutors can recuse themselves from pending investigations to make way for a special prosecutor.

Departing from that process, Nixon said in a statement, "could unnecessarily inject legal uncertainty into this matter and potentially jeopardize the prosecution."

McCulloch, a Democrat, was elected in 1991 and has earned a reputation for being tough on crime.

Ferguson city leaders said the mayor, the City Council and municipal employees have been exploring ways to increase the number of African-American applicants to the law enforcement academy, develop incentive programs to encourage city residency for police officers and raise money for cameras that would be attached to patrol car dashboards and officers' vests.

"We plan to learn from this tragedy, as we further provide for the safety of our residents and businesses and progress our community through reconciliation and healing," officials said in a public statement.

Meanwhile, Brown's funeral arrangements were set. The Austin A. Layne Mortuary, which is handling arrangements, said the funeral will be at 10 a.m. Monday at Friendly Temple Missionary Baptist Church. Brown's uncle, the Rev. Charles Ewing, will deliver the eulogy, and the Rev. Al Sharpton will also speak.

Brown will be buried at St. Peter's Cemetery in St. Louis County.