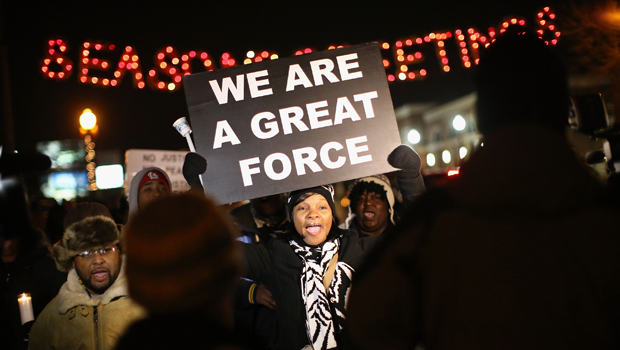 FERGUSON, Mo. -- A grand jury decision is expected soon - perhaps as soon as Saturday - on whether to indict the officer involved in the shooting death of Michael Brown in August.

The men are suspected of planning to detonate pipe bombs during protests in Ferguson.

Separately, CBS News correspondent Mark Strassmann reports from nearby Clayton, Missouri, that at least one protester was arrested for a third consecutive night overnight in demonstrations outside Ferguson police headquarters. The protesters had blocked traffic until police cleared them away.

Activists, authorities and the family of Brown called for calm as the grand jury drew closer to an announcement. But it was unclear whether the panel was still at work or when it would render a decision.

On Friday, a spokesman for St. Louis County Prosecutor Bob McCulloch told reporters that the grand jury weighing whether to indict officer Darren Wilson was still in session. Five hours later, Ed Magee declined to say whether the panel was still meeting.

The time, date and place for a news conference announcing the decision has not been decided, Magee said.

Wilson, 28, reportedly told the grand jury that he feared for his life on Aug. 9 as Brown, who was 6-foot-4 and nearly 300 pounds, came at him. Witnesses said Brown was trying to surrender and had his hands up.

The shooting of an unarmed 18-year-old black man by a white police officer led to protests, some of which turned violent. Demonstrations have continued for more than three months, though the number of protesters has dwindled and violence has become uncommon.

There were signs of rising tension.

Protesters were arrested Thursday outside Ferguson police headquarters after around 40 demonstrators blocked South Florissant Road. One of the three people arrested pushed an officer and was hit with pepper spray, according to St. Louis County Police spokesman Brian Schellman.

"Hurting others or destroying property is not the answer," Brown said in the video released by the group STL Forward. "No matter what the grand jury decides, I don't want my son's death to be in vain. I want it to lead to incredible change, positive change, change that makes the St. Louis region better for everyone."

Holder issued a general reminder to police to prepare for demonstrations and to "minimize needless confrontation."

His video message did not explicitly mention Ferguson, but it did reference demonstrations over the past few months that have "sought to bring attention to real and significant underlying issues involving police practices."

"I know from firsthand experience that demonstrations like these have the potential to spark a sustained and positive national dialogue, to provide momentum to a necessary conversation and to bring about critical reform," Holder said in the video.

"But history has also shown us that the most successful and enduring movements for change are those that adhere to nonaggression and nonviolence," he added.

Eddie Hassaun of the civil rights group Justice Disciples urged protesters not to be confrontational and for police to follow suit.

"We're looking for the action on the other side to be equally as committed to peace in the streets and peace for the demonstrators," Hassaun said.

City, county and state leaders on Friday announced a "rules of engagement" agreement between police and roughly 50 protest groups. The pact is aimed at preventing violence on both sides.

Mr. Obama also urged Ferguson to keep the protests peaceful, saying all Americans have the right to peacefully assemble to speak against actions they regard as unjust. But, he said, using any event as an excuse for violence is contrary to the rule of law.

The president commented in an interview with ABC News scheduled to air Sunday. The network released his comment about Ferguson on Friday night.

The civil rights organization Advancement Project said more than 70 protest actions are scheduled around the country, including occupying government space in Washington and a gathering at police headquarters in Chicago.

Concern about the aftermath of the announcement prompted one school district to call off classes for Monday and Tuesday. The Jennings district includes some students who live in Ferguson. It had previously planned to close for Thanksgiving starting Wednesday.

"It's been rough, especially these past few weeks leading up to the decision," Henley said. "Our business has been cut in half because the people in the community are afraid to come around."

The FBI has sent nearly 100 additional agents to Ferguson to help law enforcement agencies, according to a U.S. official who spoke on condition of anonymity because the official was not authorized to discuss the FBI plans.