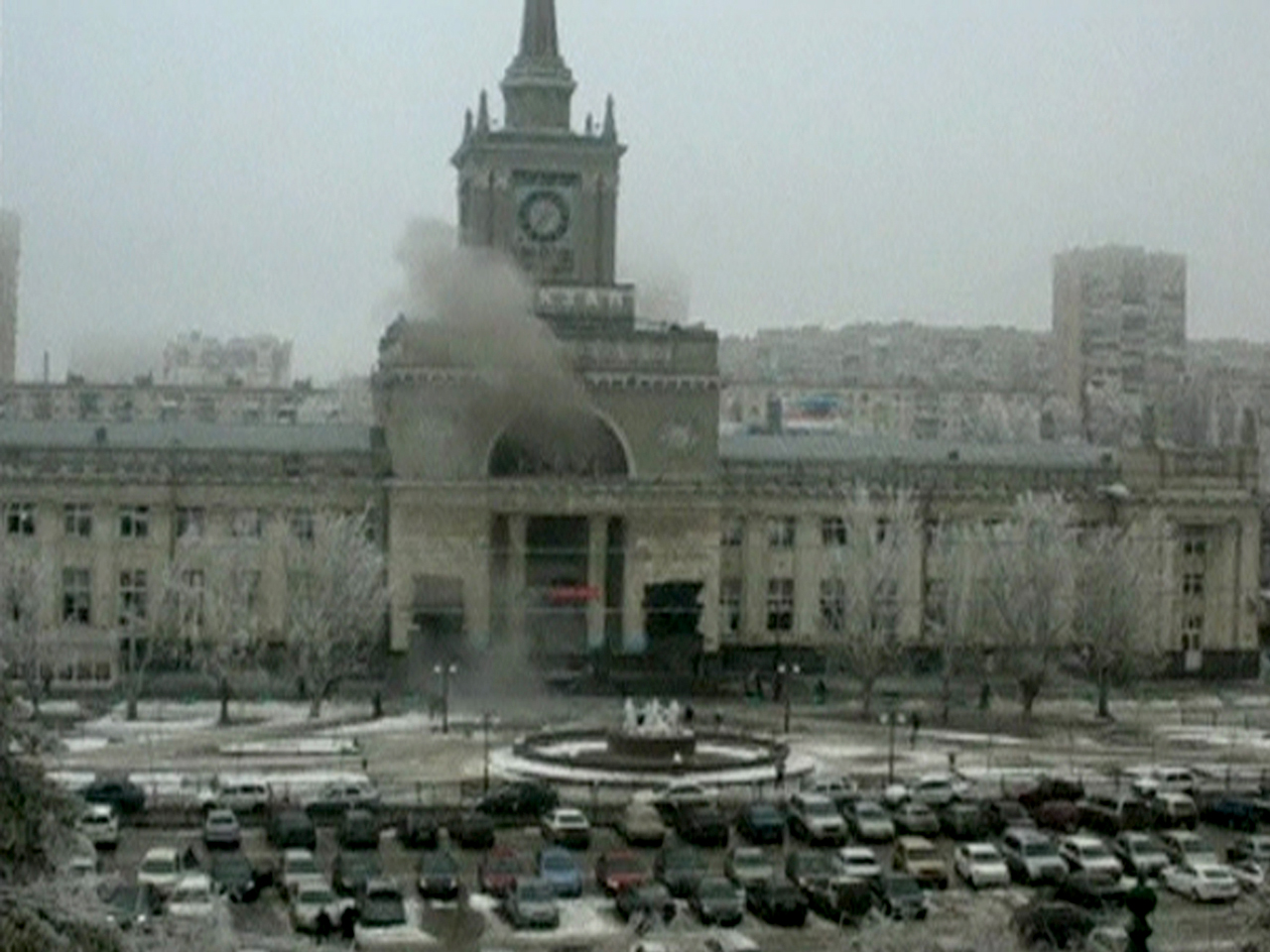 MOSCOW - A suicide bomber struck a busy railway station in southern Russia on Sunday, killing at least 15 people and wounding scores more, officials said, in a stark reminder of the threat Russia is facing as it prepares to host February's Olympics in Sochi.

No one immediately claimed responsibility for the bombing in Volgograd, but it came several months after Chechen rebel leader Doku Umarov called for new attacks against civilian targets in Russia, including the Sochi Games.

Suicide bombings have rocked Russia for years, but many have been contained to the Caucasus, the center of an insurgency seeking an Islamist state in the region. Until recently Volgograd was not a typical target, but the city formerly known as Stalingrad has now been struck twice in two months - suggesting militants may be using the transportation hub as a renewed way of showing their reach outside their restive region.

Volgograd, which borders the Caucasus, is 550 miles south of Moscow and about 400 miles northeast of Sochi, a Black Sea resort flanked by the North Caucasus Mountains.

One woman had a narrow escape when she left the station just moments before the bomb went off, reports CBS News's Holly Williams.

"I saw people running," she said. "Human flesh all around, shattered glass and broken doors. I saw smoke, but I didn't understand what was going on."

The bombing highlights the daunting security challenge Russia will face in fulfilling its pledge to make the Sochi Games the "safest Olympics in history." The government has deployed tens of thousands of soldiers, police and other security personnel to protect the games.

Through the day, officials issued conflicting statements on casualties. Officials said that the suspected bomber was a woman, but late Sunday the Interfax news agency quoted an unidentified law enforcement officer as saying footage taken by surveillance cameras indicated that the bomber was a man. It also reported that a torn male finger ringed by a safety pin removed from a hand grenade was found on the site of the explosion.

The bomber detonated explosives in front of a metal detector just beyond the station's main entrance when a police sergeant became suspicious and rushed forward to check ID, officials said. The officer was killed by the blast, and several other policemen were wounded.

"When the suicide bomber saw a policeman near a metal detector, she became nervous and set off her explosive device," Vladimir Markin, the spokesman for the nation's top investigative agency, said in a statement. He added that the bomb contained about 10 kilograms (22 pounds) of TNT and was rigged with shrapnel.

Markin later told Interfax that the attacker could have been a man, but added that the investigation was still ongoing. He said that another hand grenade, which didn't explode, was also found on the explosion site.

Markin said that security controls prevented a far greater number of casualties at the station, which was packed with people at a time when several trains were delayed.

Markin said 13 people and the bomber were killed on the spot, and the regional government said two other people later died at a hospital. About 40 were hospitalized, many in grave condition.

The Interfax news agency reported that the suspected bomber's head was found at the site of explosion, which would allow security agencies to quickly identify her.

Lifenews.ru, a Russian news portal that reportedly has close links to security agencies, posted what it claimed was an image of the severed head of the female attacker. It said she appeared to have been a woman whose two successive rebel husbands had been killed by Russian security forces in the Caucasus.

Female suicide bombers, many of whom were widows or sisters of rebels, have mounted numerous attacks in Russia. They often have been referred to as "black widows."

In October, a female suicide bomber blew herself up on a city bus in Volgograd, killing six people and injuring about 30.  Officials said that attacker came from the province of Dagestan, which has become the center of the Islamist insurgency that has spread across the region after two separatist wars in Chechnya.

As in Sunday's blast, her bomb was rigged with shrapnel that caused severe injuries.

Chechnya has become more stable under the steely grip of its Moscow-backed strongman, who incorporated many of the former rebels into his feared security force. But in Dagestan, the province between Chechnya and the Caspian Sea, Islamic insurgents who declared an intention to carve out an Islamic state in the region mount near daily attacks on police and other officials.

The Kremlin replaced Dagestan's provincial chief earlier this year, and the new leader abandoned his predecessor's attempts at reconciliation and his efforts to persuade some of the rebels to surrender in exchange for amnesty.

Security camera images broadcast by Rossiya 24 television, showed Sunday's moment of explosion, a bright orange flash inside the station behind the massive main gate followed by plumes of smoke.

A witness, Roman Lobachev, told Rossiya television that he was putting his bags on a belt for screening when he heard the sound of an explosion. "I heard a bang and felt as if something hit me on the head," said Lobachev who survived the attack with minor injuries.

The bombing followed Friday's explosion in the city of Pyatigorsk in southern Russian, where a car rigged with explosives blew up on a street, killing three.

Following Sunday's explosion, the Interior Ministry ordered police to beef up patrols at railway stations and other transport facilities across Russia.

Russia in past years has seen a series of terror attacks on buses, trains and airplanes, some carried out by suicide bombers.

Umarov, who had claimed responsibility for the 2010 and 2011 bombings, ordered a halt to attacks on civilian targets during the mass street protests against President Vladimir Putin in the winter of 2011-12. He reversed that order in July, urging his men to "do their utmost to derail" the Sochi Olympics which he described as "satanic dances on the bones of our ancestors."

A group calling itself Anonymous Caucasus said in a statement Friday on the Caucasus rebel web site, kavkazcenter.com, that it would launch cyber-attacks to avenge Russia's refusal to acknowledge the 19th century expulsion of Chirkassians, one of the ethnic groups in the Caucasus.

In a statement, the U.S. State Department condemned the attack.

"The United States condemns in the strongest terms today's terrorist attack in Volgograd," said spokeswoman Jen Psaki. "We send our sincere condolences to the families of the victims and stand in solidarity with the Russian people against terrorism of any kind."

The International Olympics Committee expressed its condolences over the bombing, but said it was confident of Russia's security preparation for the games.

"At the Olympics, security is the responsibility of the local authorities, and we have no doubt that the Russian authorities will be up to the task," it said in a statement.

Russian authorities have introduced some of the most extensive identity checks and sweeping security measures ever seen at an international sports event.

Anyone wanting to attend the games that open on Feb. 7 will have to buy a ticket online from the organizers and obtain a "spectator pass" for access. Doing so will require providing passport details and contacts that will allow the authorities to screen all visitors and check their identities upon arrival.

The security zone created around Sochi stretches approximately 60 miles along the Black Sea coast and up to 25 miles inland. Russian forces include special troops to patrol the forested mountains towering over the resort, drones to keep constant watch over Olympic facilities and speed boats to patrol the coast.

The security plan includes a ban on cars from outside the zone from a month before the games begin until a month after they end.