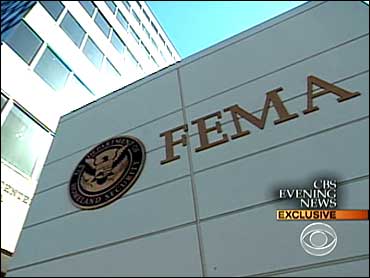 On the heels of CBS News' exclusive report of widespread problems in FEMA's New Orleans recovery office for Hurricane Katrina, the acting head of the agency arrived in New Orleans to get a first-hand look.

As Keteyian reported Wednesday, Whitmer was the subject of more than 30 employee-related complaints in the last year, including several for harassment.

"We need to insure we get all the facts before we do anything, and make any changes," Ward said.

In addition, CBS News has learned James Stark would no longer head the New Orleans recovery office - but would retain his other job overseeing recovery across the Gulf Coast.

In the exclusive CBS News report, more than a dozen current and former FEMA employees detailed a so-called "toxic bureaucracy" inside the New Orleans office responsible for Hurricane Katrina recovery efforts - a hostile work environment, they claimed, created by Chief of Staff Doug Whitmer and tolerated by his boss, Jim Stark.

"Jim approves everything that Doug does so, ultimately, the problem is Jim," said one former employee who did not want to be identified.

Now there are new questions about whether Stark misled Congress in his testimony on Wednesday when he was asked about a litany of employee complaints.

"The problems that you just enumerated came to light last week," Stark said.

But documents obtained by CBS News show Stark was informed about at least two of the sexual harassment complaints against Whitmer last October.

Last night Stark offered this explanation to CBS affiliate WWL in New Orleans: "The question I thought the congressman was asking was about the widespread allegations of workplace problems around our office and that's what I answered."

"We're getting nothing from Jim Stark except 'no, no, no' and our people are tired of it," she said. "We need an innovative manager - he has shown himself not to be."

While millions of Gulf Coast residents somehow manage to hold on - waiting for this sideshow to end, and the floodgates of recovery to fully open.