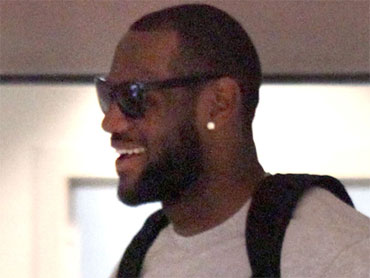 The Miami Heat used every precious second of their promised time with LeBron James - and then some.

The Heat's delegation arrived at 10:20 a.m. James showed up two minutes before the scheduled 11 a.m. meeting wearing a T-shirt, shorts and a backpack.

At 1:50 p.m., the Heat's delegation paraded through the lobby of the IMG building without saying a word. Before getting in their cars, they passed the Los Angeles Clippers' two-man contingent of acting general manager Neil Olshey and executive Andy Roeser.

Olshey then joked that Riley went into overtime with James.

"Is coach going to get fined for going over his allotted time?" Olshey asked a person who works for James. "Don't worry, we'll be short."

The Clippers wrapped up their meeting with James in about an hour. Olshey coached James at a summer camp before his senior year of high school. He knew back then James was a special player, one he would like to see relocate his game to the West Coast.

"I predicted he would be Rookie of the Year, an All-Star in his second year and the best player on the planet in his third year," he said. "So far, I've been right. I think we've got the best roster and the best chance and the best city."

After the meetings concluded, James was asked how things were going as he headed out the door.

The second day of LeBronmania didn't have as much star power.

On Thursday, James met with the New Jersey Nets, who brought billionaire owner Mikhail Prokhorov and hip hop superstar Jay-Z to help make their pitch. The New York Knicks followed with a dazzling presentation that required a rental van to haul their equipment.

James will visit on Saturday with the Chicago Bulls and Cavaliers, the two teams widely considered co-favorites to sign the two-time MVP.

James pulled into the garage of the IMG building in a Range Rover and was escorted to the elevator banks by two Cleveland police officers for his 11 a.m. meeting with the Heat. Miami's advance team, led by executive and salary-cap specialist guru Andy Elisburg, arrived nearly 90 minutes before the start to set up the Heat's production.

Elisburg may not be the best known of Miami's group, but he may have the most important job since the team is hoping to re-sign Dwyane Wade and add either James and/or fellow free agent Chris Bosh to its roster. The Heat, who have more than $40 million in salary-cap space, met with Bosh in Chicago on Thursday.

James was in a great mood when he walked in for the second day of his hyped recruitment.

"Hey, what's up?" he said before heading to LRMR Marketing, the company he started with Maverick Carter, his close friend and business partner.

On the eighth floor, Riley was seen pacing the hallway waiting for James.

Riley's pitch to James wasn't expected to contain too many surprises, and it likely focused on the possibility of him playing with Wade, a U.S. Olympic teammate and friend. The Heat also have talked about uniting the two with Bosh, who was in the same draft class as James and Wade.

Riley's recruiting plan goes something like this: He talks about the benefit of playing in an no-income-tax state like Florida, something that would be worth millions to James, whose off-court earnings dwarf his on-court salary. He sings the praises of having a willing-to-spend, not-willing-to-meddle owner in Arison, plus talks about what it means to be part of the Heat family, something to which Mourning can attest.

And Riley also speaks about building a dynasty, the word he's been using with Heat fans for months.

Given all that, these days could largely define a huge portion of Riley's Heat legacy.

Wade has said he wants to stay, but he will leave if Riley doesn't make the moves that turn Miami into a championship contender again. Although Wade was the clear leader of the 2006 title team - his finals MVP trophy proves that - he's lamented not getting out of the first round of the playoffs since.

James invited the Clippers to meet with him, but it's hard to imagine them making a compelling argument for him to sign.

The club does have a nice core group of young players, including center Chris Kaman, forward Blake Griffin (a No. 1 draft pick in 2009) and guards Baron Davis and Eric Gordon. The Clippers also can entice James with Hollywood and the potential to add to his riches in the entertainment industry.

But the team is still without a coach and there's the added stigma of a losing tradition under owner Donald Sterling, who did not make the trip to Cleveland. James has said he wants go somewhere to win a championship. If that's the case, his team is the Lakers, not the Clippers.

The Cavs are expected to make a short, but sweet pitch to James.

Their message will focus on one word: Home.

As the meetings took place above the corners of East 9th Street and St. Clair, several Cavaliers employees held signs with words dear to James such as "Community," "Family" and "Mission." There were similar signs on the overpasses of Interstate-77, the freeway James travels between his home and Cleveland.

"I think we've got about 36 people all over town with these signs," said Nate Ferrall, a 39-year-old Clevelander, who refused to confirm he works for the Cavs. "We just want to remind LeBron that this is his home and that we support him."