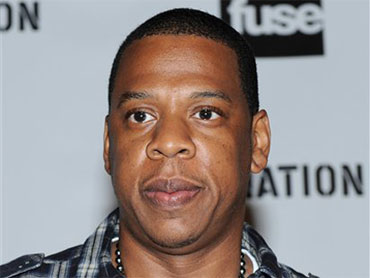 As they made their exit, the New Jersey Nets passed the New York Knicks in the driveway of the parking garage.

Everyone came to see LeBron James.

Prokhorov left with a few members of the Nets' entourage at 12:43 p.m. Lagging a few minutes behind them was Jay-Z, a close friend of James, who was sitting in the back seat of a black sedan leaving the garage as the Knicks' motorcade - 2 sedans and 2 SUVs - pulled in.

And so went the initial hours of James' courtship, which has turned into his personal recruitment and has captivated the sports world.

"It went well," Johnson said before the Nets' congregation headed to Chicago to meet with free agents Dwyane Wade and Chris Bosh.

After landing at Hopkins International Airport at 10:36 a.m. the Nets' group made the short drive to Cleveland to meet with James at the office of his business manager, Maverick Carter. James arrived about eight minutes before New Jersey's delegation.

James was driven from his home in Akron in a white SUV and was quickly escorted through a side door at the IMG Building, where dozens of reporters and photographers were waiting. Wearing a gray Nike T-shirt and sunglasses, he made a brief stop in the lobby before heading up to Suite 823, the headquarters of LRMR Marketing, the company James began with Carter and two other longtime friends.

When Jay-Z strolled through the lobby, several customers in a cafe adjacent to the lobby applauded and yelled his name.

Walsh was brought into the building in a wheelchair following recent neck surgery.

The Miami Heat and Chicago Bulls are expected to meet with James on Friday, with the Cavaliers scheduled to visit with him Saturday.

Cleveland's hoping that James' loyalty to home will keep him in Ohio. The team gave him something to consider as free agency opened by offering Byron Scott their coaching job. Scott's agent, Brian McInerney, told the AP that Scott has accepted the position.

James is not believed to have played any role in Scott's hiring, which ended a drawn-out search by the Cavs. However, Scott's background as a 14-year player and 10-year head coach in the league is certainly appealing to James. Scott took the Nets to the finals twice and built a strong relationship with New Orleans star guard Chris Paul, who is one of James' closest friends.

James is being courted by teams - and cities.

New York launched a "C'mon LeBron" campaign, featuring Mayor Michael Bloomberg and a host of high-profile celebrities, to woo the 25-year-old to Madison Square Garden and the Big Apple. Not to be outdone, Cleveland, a city which would lose untold millions if James leaves, is banking on him staying put.

Large banners reading: "Home: More Than A Player" have been attached to the sides of buildings and hung over downtown streets.

Dwyane Wade grew up in Chicago and still makes his offseason home there.

The Bulls would like to see that arrangement become more permanent.

Wade and his representatives spent about two hours with the Bulls on Thursday, hearing their recruiting sales pitch as the most awaited free-agent period in NBA history - maybe sports history - got under way in earnest. Wade talked with the Bulls at the United Center, where as a kid, Wade idolized Michael Jordan and fantasized about following him to the NBA.

Details of the meeting were not immediately known. Wade did not comment to reporters as he left the United Center, rolling down the window on the black Suburban he was in simply to give the peace sign with a smile.

Wade's time with Chicago coincided with the New Jersey Nets' meeting with the megastar of this class, LeBron James, in Cleveland on Thursday morning. Both meetings ended at roughly the same time, and the Nets' contingent quickly left Cleveland to fly to Chicago for an afternoon meeting with Wade.

Pat Riley, Wade's boss in Miami for the past seven seasons, got the first word in on free agency, contacting the 2006 NBA finals MVP at the largely ceremonial time of 12:01 a.m. EDT on Thursday. Wade has said repeatedly that he would like to stay in Miami, but structured his last contract for this opportunity of becoming a free agent for the first time.

The Heat are still "very confident" that Wade will stay in Miami, said Alonzo Mourning, Wade's former teammate, his close friend and now an executive in the Miami organization.

Wade's talk with the Bulls almost certainly included comparisons to that Jordan era and Wade's continued ties to the city. He recently purchased a new home in Chicago, and his sons, ages 8 and 3, have been raised almost entirely there.

The Bulls would love to see Wade settle in on the court, too. They let leading scorer Ben Gordon sign with Detroit last summer and traded away John Salmons during the season, helping them secure nearly $30 million in cap room for the free agency sweepstakes.

Those two guards are gone and so is veteran Kirk Hinrich, leaving plenty of time available for a scoring guard like Wade in the backcourt with All-Star point guard Derrick Rose.

The Bulls are also expected to talk with Knicks forward David Lee on Friday, according to Lee's agent, Mark Bartelstein. Lee was a first-time All-Star and averaged 20.2 points and 11.7 rebounds, but he's expected to weigh bigger offers.

Wade also is expected to speak with other clubs, including the New York Knicks, before returning to South Florida. He and Mourning will appear Tuesday north of downtown Miami at a press conference for their annual Summer Groove, a fundraising weekend for youth programs and other charitable causes.